Anyong-haseyo! The Vorgom Trinity has returned from its ten day excursion to Korea! Ge, Spencer, and I had a great time in Korea and we really enjoyed the New Interfaces for Musical Expression Conference (NIME) that was hosted by members of the Korea Advanced Institute of Science and Technology (KAIST) in Daejeon. Our poster presentation for SoundCraft went smoothly (we didn’t lose our poster during the 5,600+ mile journey) and our performance of GG Music was well-received. Aside from the conference, we got to do some sight-seeing, watch some professional StarCraft, play plenty of StarCraft, and of course eat tons of amazing food. Here are some highlights with photos! 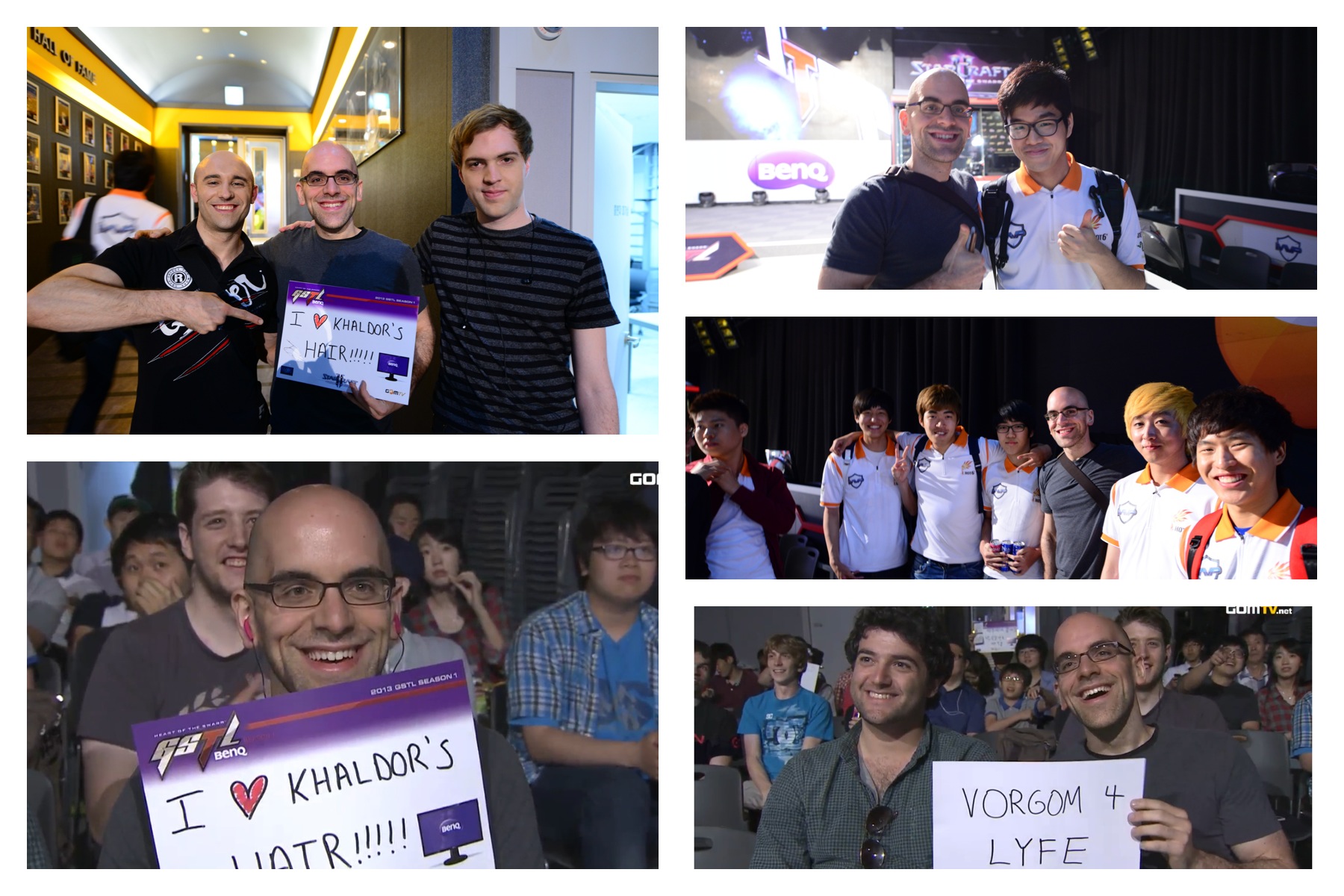 GSTL Match - We arrived in time to catch a StarCraft 2 GSTL (Global StarCraft Team League) match between two professional eSports teams - MVP and NSHoSeo. The GSTL is a league in Korea composed of eight professional StarCraft 2 teams, professionally produced by GOM TV. There are even Korean and English commentators to provide in-depth analysis of matches! Teams send out players who play 1-versus-1 matches in a best of 7 format. Players who win get to keep playing and players who lose must be replaced by another team member. The losing team also picks the map for the next set so there is some strategy involved in who gets sent out against who. That said, the match between MVP and NSHoSeo was a quick one as Keen, from team MVP, all-killed NSHoSeo by taking out four players without dropping a single set! Spencer and I actually made a few appearances on the show holding up some cheerfuls (handwritten signs)! After the match was over, we even got to meet the MVP team, and the English casters - Khaldor and Wolf! 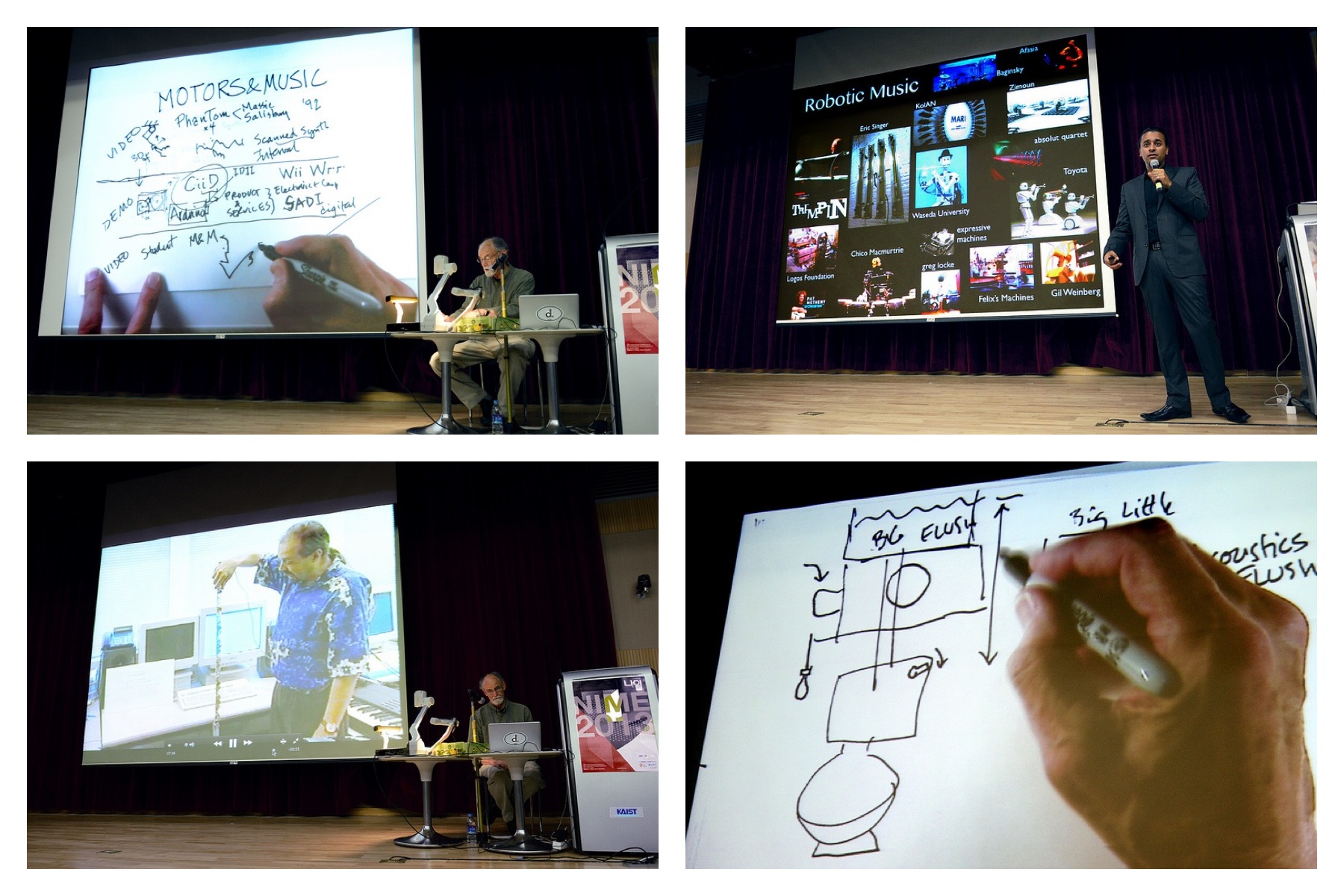 Train to Daejeon and NIME Keynotes - The first segment of the NIME conference was hosted at KAIST in Daejeon which is about 90 miles (~144 kilometers) south of Seoul. On the Korea Train Express (KTX) high-speed train, which has a max speed of 190 mph (305 km/h), we got to Daejeon in no time. NIME featured two keynote speakers - the first by Bill Verplank, a human-computer interaction designer based out of Stanford University. During his keynote, titled Motors and Music, Dr. Verplank discussed the difference between handles and buttons which invited an interesting observation from an audience member about the difference between toilet handles/buttons around the world. Dr. Verplank took the seemingly odd observation in stride and went over how people interact with toilets, providing plenty of laughs for the audience. The second keynote featured Ajay Kapur, a Princeton alumnus, who currently teaches at the California Institute of the Arts and the New Zealand School of Music. Ajay’s talk focused on gharanas - a system in Hindustani music that links musicians by lineage or apprenticeship. Ajay, a sitar player himself, showed us how he fits into one of India’s sitar gharanas, and then took that traditionally Hindu system and applied it to the world of computer music. Ajay explored all the people that mentored, collaborated with, and influenced his work in robotic music, along with the graduate students he now mentors. From that network, he began building his own personal computer music gharana. Both keynotes were superb! 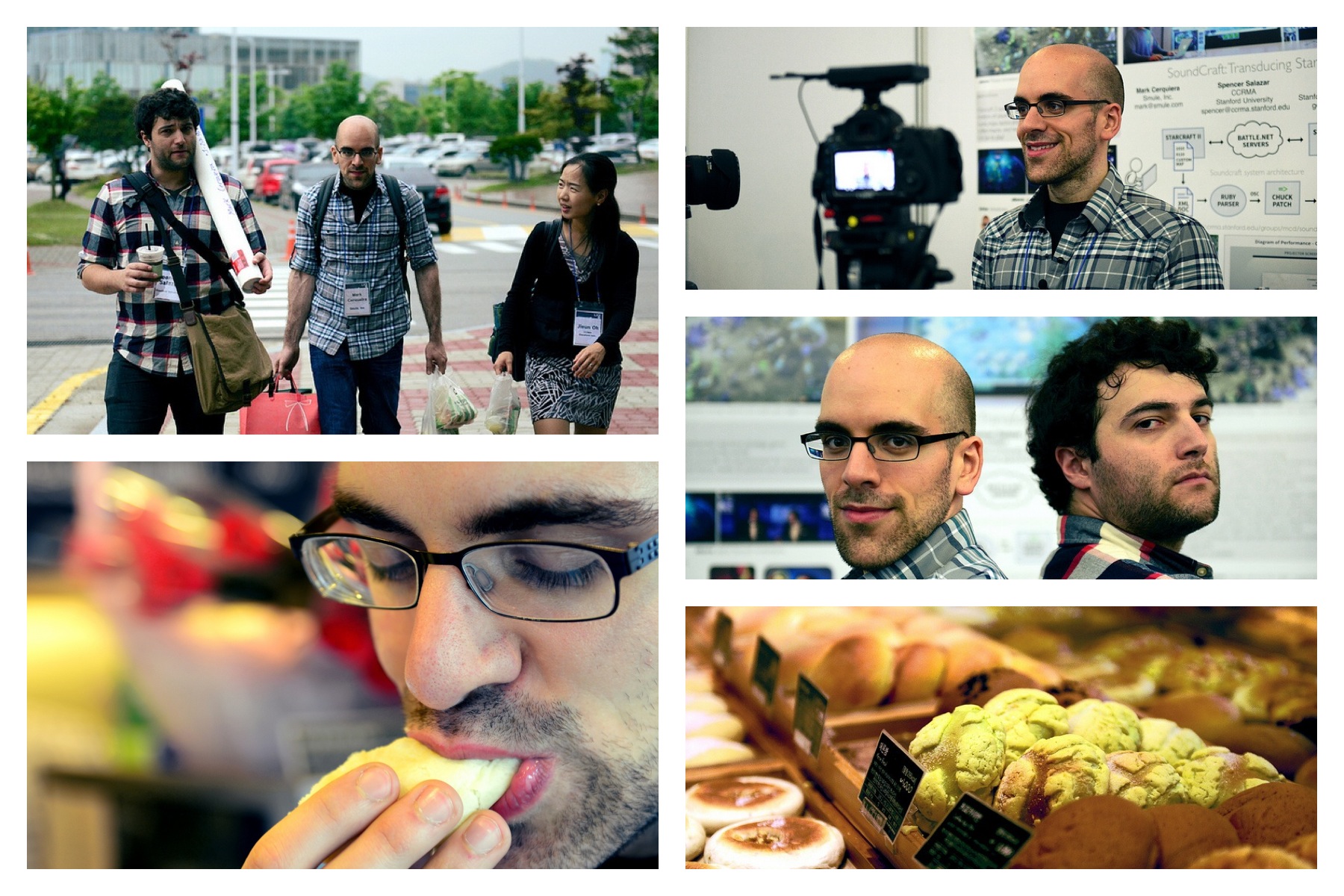 Poster Session and Korea Bakeries - We presented our poster on SoundCraft during the Tuesday afternoon session. The session went well - there was a good turnout, plenty of awesome posters and demos in the hall, and quite a few people came over to hear about our work sonifying StarCraft 2. I even got interviewed by a Korean news crew that was at the conference! More importantly, Tuesday was also the day I discovered how wonderful Korean bakeries are. KAIST has a Tous Les Jours (a Korean bakery franchise) on campus and I ate some of the most amazing baked goods ever! My favorite item was a soft, milk bread bun with cream filling in it! While there are a few Tous Les Jours in the USA, there are none in the Bay Area. Fortunately for us, however, there are Paris Baguettes (another Korean bakery franchise) in the South Bay. There are also likely plenty of amazing non-franchise bakeries in the Bay Area. If you know of any awesome places please tweet me! 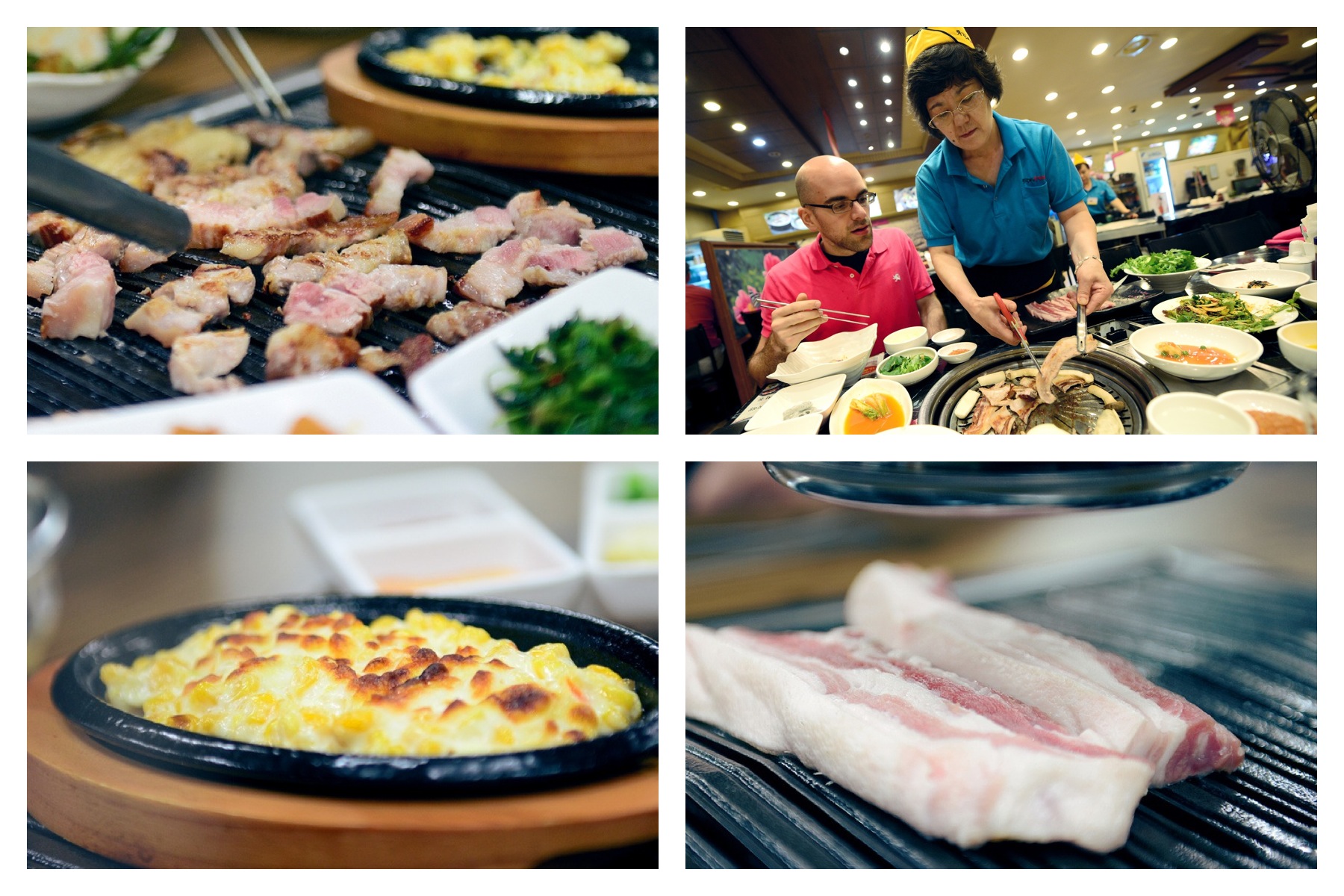 Concert and Korea BBQ - On Wednesday we performed GG Music during the evening concert. While GG Music had already been performed at Stanford CCRMA’s Music and Games concert, Spencer and Ge did some more powering up of the GG in GG Music. The finished product sounded great in the concert hall over eight channels - CCRMA’s penchant for multi-channel audio (shared by the Princeton Laptop Orchestra and its original multi-channel hemispherical speaker) made the piece even better as much of the feedback mentioned how great the spatialization of sound was. After the concert we celebrated by going to eat at a Korean BBQ restaurant. While finding English-speakers in Seoul was not a frequent occurrence, most restaurants had English translations or at least photos of the items, but most places in Daejeon did not! But we managed just fine. I had Jieun, one of Ge’s graduate students who is Korean, translate a few fundamental words/phrases (e.g. beef, pork, rice, bring more food) in my notebook. Armed with these handy phrases, a rediscovering of the game charades, and a dash of optimism with lots of head nodding, we filled our stomachs with amazing Korean BBQ! 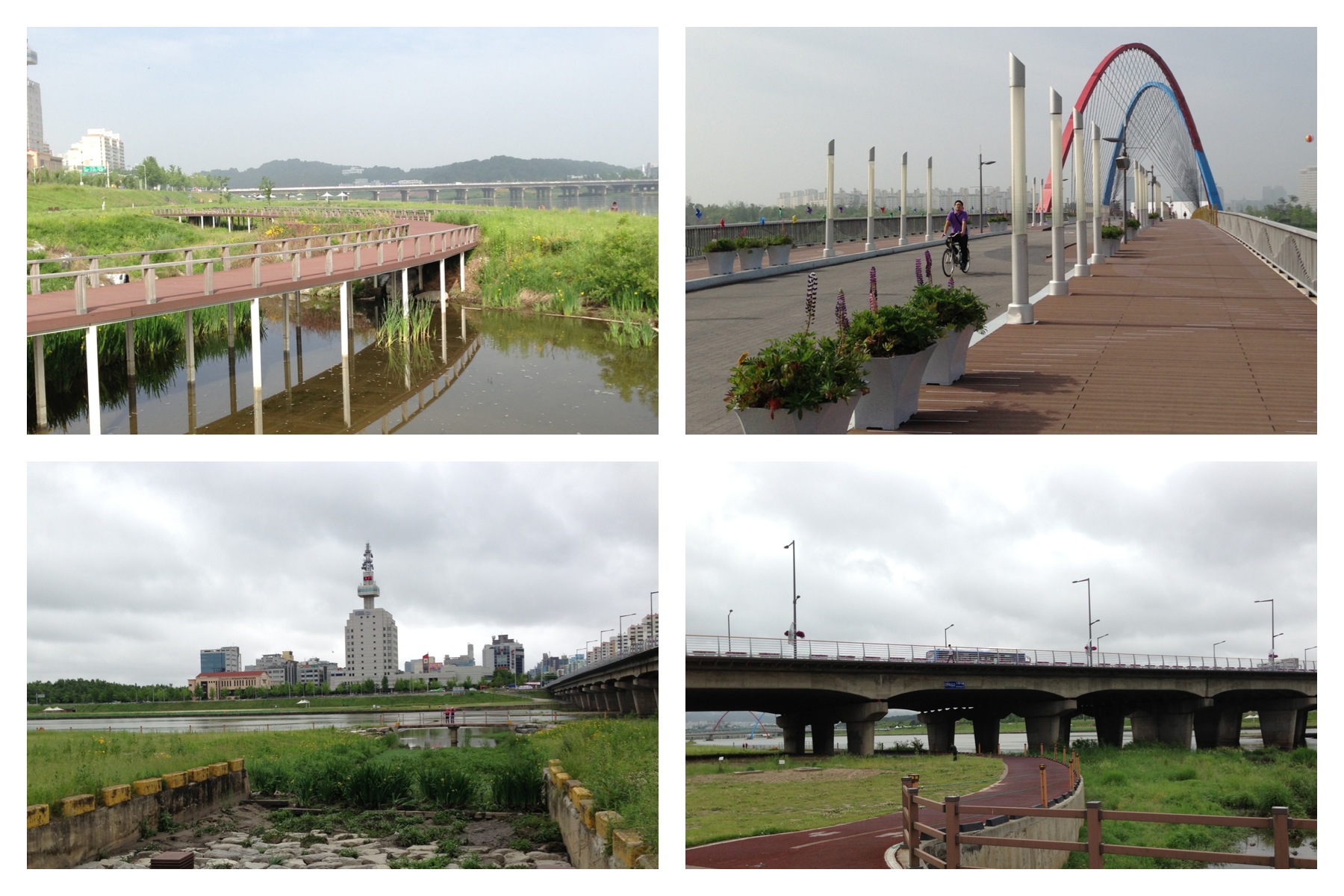 Running About in Daejeon - While in Daejeon, jet-lag had me up very early in the morning. Curiosity to explore the town mixed with a tinge of guilt from the gluttonous meals we were consuming had me running around town. Like Seoul is divided by the Han River (with 27 bridges to cross it!), Daejeon is divided by the Gap River. The cab ride from our hotel to KAIST crossed the Gap River and I saw there were a few walking paths along the river, so I figured that would be a good place to go to. The walking paths along the river proved to be quite scenic. To add to that, across from the bridge we normally crossed to get to KAIST, there was an awesome pedestrian bridge. 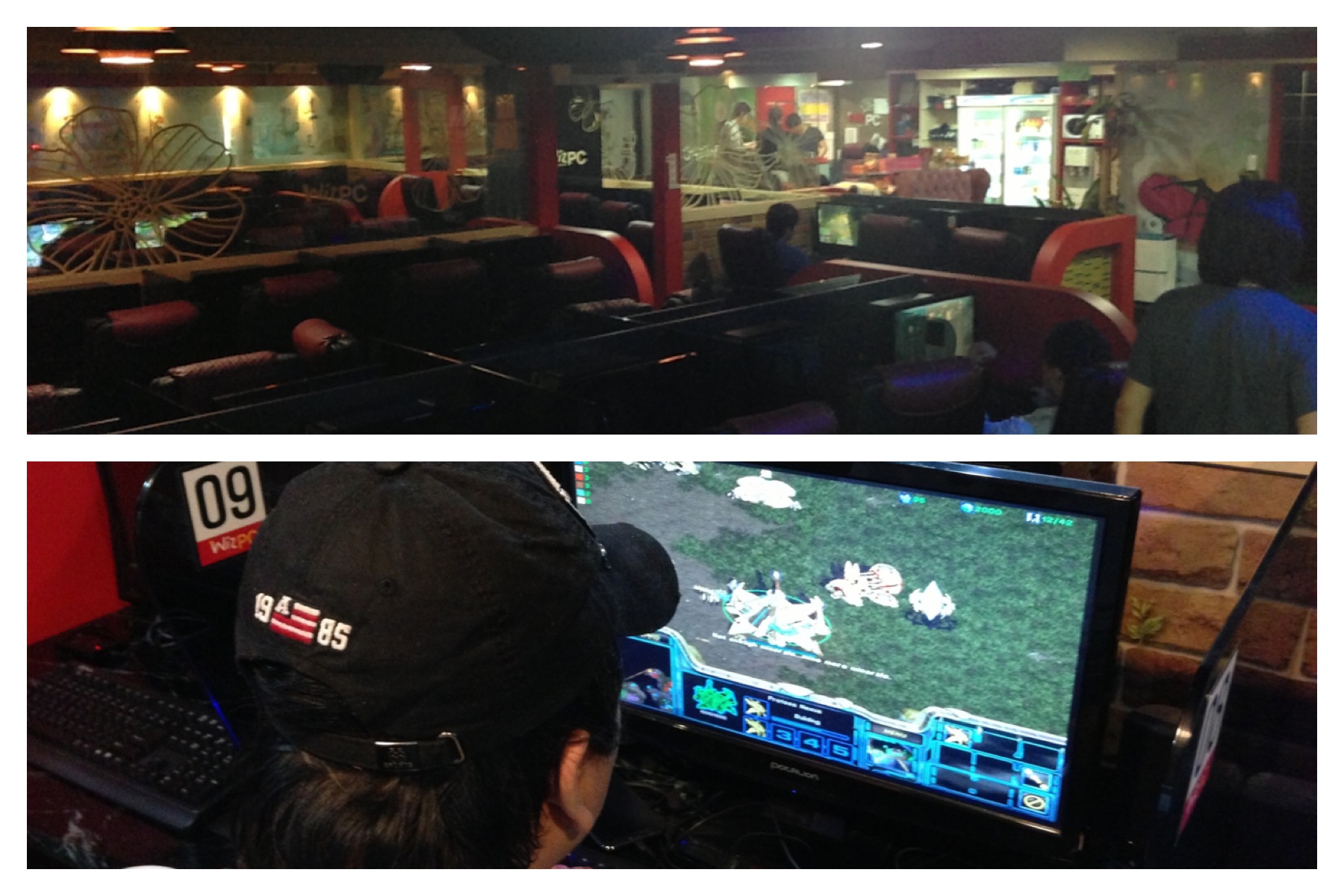 Last Day of NIME in Seoul and PC Bang - The last day of NIME took place in Seoul at the Lock Museum. The evening concert was particularly incredible featuring a piece, Bodhisatva - a Korean/Indian digital mashup, with Ajay on his electronic sitar and Eun-il Kang on an electronic Haegeum - a traditional Korean string instrument, resembling a fiddle. To round out the show was an amazing performance by Ensemble Sinawi - taking their name from the traditional form of Korean music, sinawi. Here is there Facebook band page and a song performed by the group. The concert closed out a successful NIME 2013. Afterwards we headed to our hotel in Seoul and started exploring the area. We quickly found and settled in at Wiz PC, a PC bang. It’s an Internet café mixed with a gaming center mixed with instant ramen and energy drinks. Quite simply - a nerd lair! While League of Legends is the dominant game played at PC bangs, we played the one true game - StarCraft 2. Interestingly enough, there was a brave soul a few seats down from us playing Brood War, the expansion to the original StarCraft! 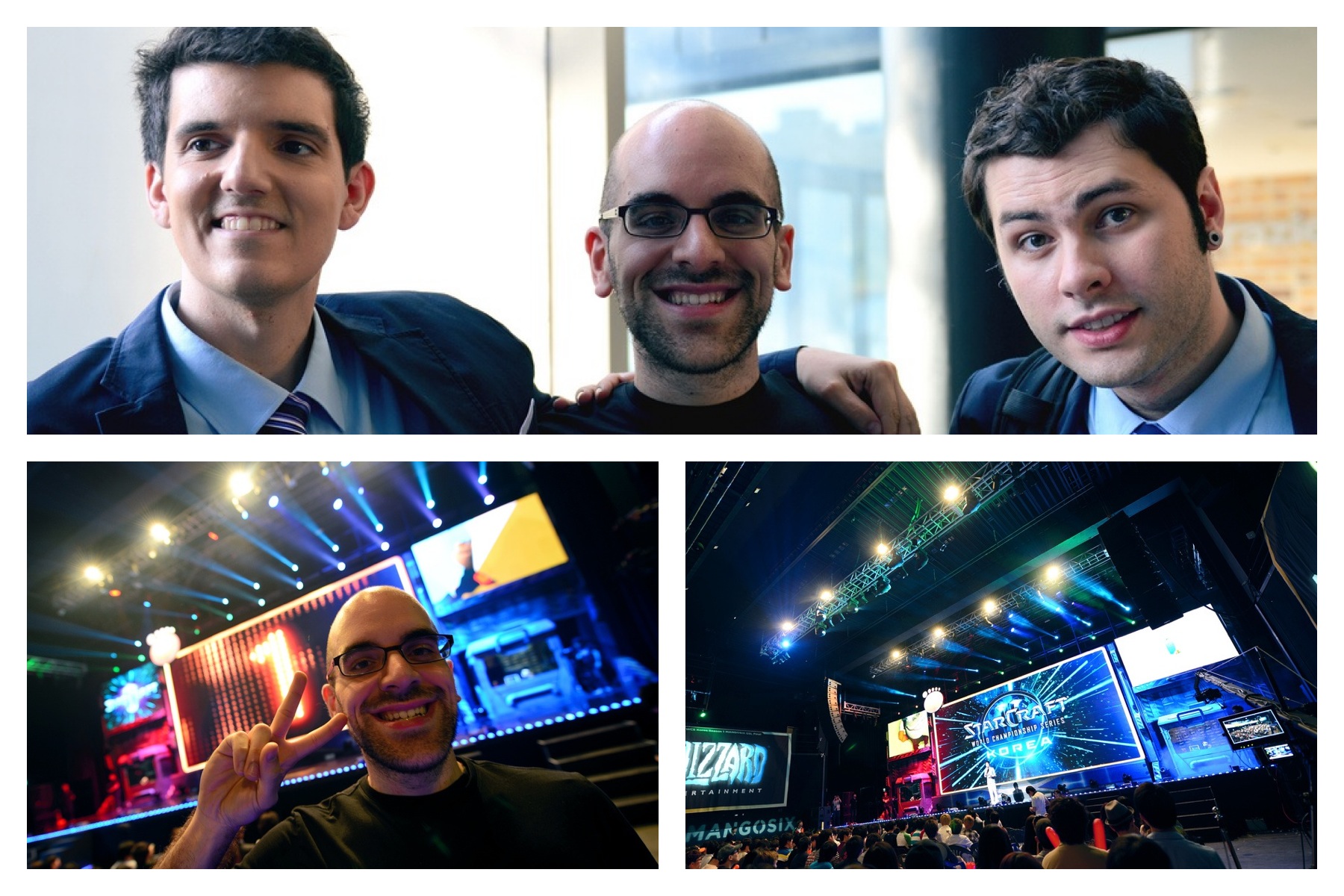 GSL Finals - On Saturday, I was able to fulfill a dream of mine and attended a GSL (Global StarCraft League) final. The GSL is the world’s most competitive StarCraft tournament and this final featured two strong players - a Terran, STX SouL’s Innovation and a Zerg, Woongjin Stars’ Soulkey. Innovation was heavily favored to win the best-of-7 finals and at the end of the third game with Innovation up 3-0, it looked like our trip to the finals was going to be a short one. Disappointment quickly transformed into excitement as Soulkey fought his way back to tie the series at 3-3, and then it all came down to the final set. Soulkey went on to win the set and the match 4-3, pulling off the greatest comeback in StarCraft 2 history! To top off the amazing day, after the finals were over, I got to meet the preeminent StarCraft casters and heroes of mine, Tasteless and Artosis. They were both extremely friendly and were also in awe of Soulkey’s comeback. After the finals, we headed back to the hotel and quickly made our way over to the Wiz PC. Inspired by watching amazing StarCraft, we had to go play tons of StarCraft ourselves to top off our wonderful trip before our departure back home the following day!