The Game I'm Most Excited For

Earlier this week, I posted about my excitement for upcoming 3DS games, but I’m also excited about games coming to all consoles. The Last of Us is in my PS3 and I’m eager to start playing it. This game has received immensely positive reviews and supposedly grossed more than The Man of Steel during its opening weekend! The new open world, photorealistic graphics, and new Jack Bauer voice acting for Snake make me giddy to embark on Hideo Kojima’s newest chapter in the Metal Gear series. Final Fantasy Versus XIII has transformed itself from vaporware into the fifteenth entry in the series. Few details, trailers, and gameplay videos have been revealed, but I’m hoping Square Enix doesn’t screw up the first entry of their flagship series on the next generation of consoles. Pikmin 3 and The Wonderful 101 give the Wii U a much-needed boost to its somewhat lackluster library. These are a few of the games I am looking forward to, but the one game I absolutely cannot wait to get my hands on is a gem that will be coming exclusively to Nintendo’s Wii U.

Monolith Soft’s X was not revealed at E3 but instead during a Nintendo Direct broadcast for the Wii U in January. Details on X are sparse but it appears to be a sequel (if not story-wise, at least spiritually) to the Wii game Xenoblade Chronicles. Xenoblade is one of my all-time favorite games that revived my faith in JRPGs. I put a good 120+ hours into the game and definitely went through a bit of separation anxiety when I realized I had played the game to its end. Two of my coworkers picked up Xenoblade after I kept raving about it. Midway through gaming, John said it was interfering with his ability to get anything done, so he brought the game disc to work and read a plot summary on Wikipedia to avoid getting sucked in again. Josh did things properly (he completed the game), and agrees that Xenoblade is astounding. 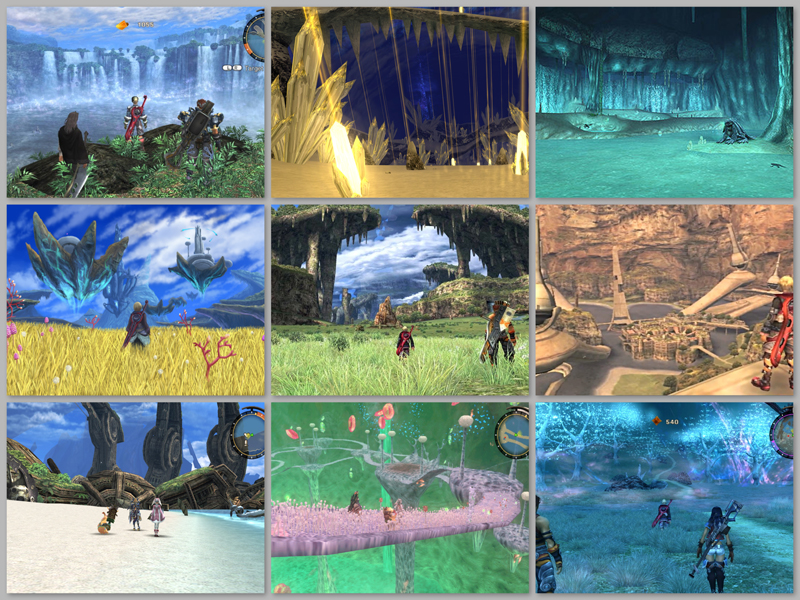 Some of the different areas you explore in Xenoblade Chronicles.

When I saw this trailer, all of the amazing memories and feelings I got playing Xenoblade came flooding back - I might’ve shed a few tears of joy. The trailer shows off beautiful and vast open world environments. Even on the Wii, Xenoblade had environments that were an absolute pleasure to explore. I remember the first time I arrived in Xenoblade’s first large free-roaming area: the huge grassy Gaur Plains. I ignored all the story objectives and just ran around to every nook and cranny of the map, dying a few times because some of the enemies were very strong. It was just fun to run around and explore – something I find missing in a lot of games. Traveling from area to area revealed new and varied landscapes to explore like the swampy Satorl Marsh, snowy Valak Mountains, and dense vegetation of the Makna Forest.

During another Nintendo Direct that coincided with E3, a new trailer revealed more interesting environments and gameplay footage. This trailer heavily featured mechs, both for exploring and doing battle against very large dinosaur-like enemies. While the mechs in Xenoblade were never able to be piloted, it appears X inherited from its older predecessor, Xenogears the mechanic to allow players to pilot and fight in mechs. The addition of flying mechs, as well as beautiful and potentially larger open-world environments, has me brimming with glee!

The music in Xenoblade was top notch. The composing trio ACE+ did a great job composing pieces day/night pieces for each of the areas (check out the Guar Plains day music and night music), awesome battle music (check out the guitar-laden Mechanical Rhythm), and very moving pieces that complemented the progression of the story (like Unfinished Battle). The first trailer for X reveals that the music will be composed by Hiroyuki Sawano whose discography features plenty of work on movies, anime, and TV shows. X will be Sawano’s first video game, but if the music to the two trailers released is any indicator, I am eagerly anticipating checking out X’s soundtrack!

I believe that Monolith Soft can deliver an experience that will top Xenoblade! The wait may be long as no release date has been announced, but I’ve got some awesome games to tide me over in the meanwhile. The Last of Us is fired up and the always reliable Tales series brings Tales of Xillia to the US in early August. It might also be a good time to revisit the Xenosaga trilogy that I put down somewhere in the second chapter.