Working at a Zoo

In high school, I was fortunate to be part of the Science Explorers Program at the Newark Museum. Founded in 1995, this program was part of the YouthAlive! national initiative, which aimed to “provide positive work and learning opportunities for young people.” During my three years in the program I got to participate in cool science workshops, field trips to national parks, a sightseeing tour of Washington DC, an annual fundraising gala, and even had my portrait painted by an artist. But most importantly, I got to spend three years working in a zoo! Warning: Pictures of me in high school, incoming! 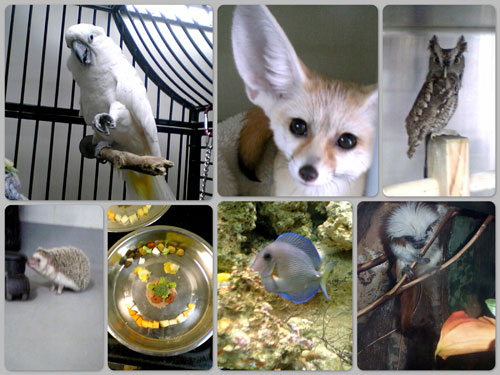 The Mini Zoo at the Newark Museum featured over one hundred animals spanning roughly fifty different species. “Mini” is certainly warranted as we only had nine public-facing animal enclosures and did not feature any large animals: our largest resident was an 8-foot long, 60 pound Burmese Python called Bernie. We had a lot of animals behind-the-scenes that were used for educational programs at the museum. Some of my favorites at the zoo were Blanca, an Umbrella Cockatoo; Digger, a Fennec Fox; Ginny, a Virginia Opossum; and Dave, quite possibly the oldest Rock Dove Pigeon ever. The team of keepers managing the zoo was likewise pretty small: there were two full-time animal keepers, a part-time keeper, and me. 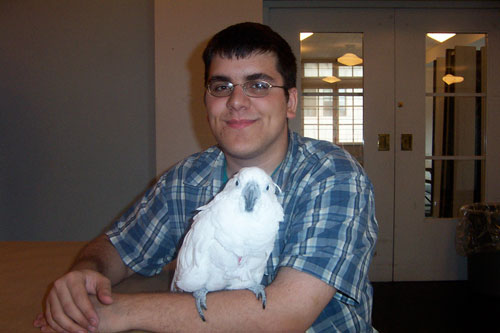 Me and Blanca (Umbrella Cockatoo) at her birthday party.

I’m sure the ramp up program for a high school student with no experience handling or caring for animals involves a lot of vetting. During the school year I did one four-hour shift each weekend and my first few visits involved reading up on all the animals in the zoo, and common rules regarding care and handling animals. After that, I spent three months in the kitchen. A trusty binder covered, in very great depth, all the dishes I had to prepare. Growing up hating vegetables and greens, I got pretty good at differentiating them. I later found out that three months in the kitchen usually bored most aspiring animal keeper interns, who eventually would just transfer to a different part of the museum. 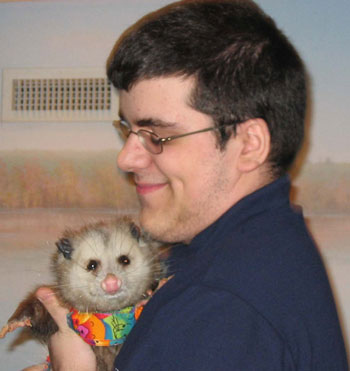 Me and Ginny (Virginia Opossum): the only friendly opossum I know!

Following that, the list of tasks I could be given slowly grew. After three months in the kitchen, I started carefully placing food in the animal habitats. Once, a mongoose must’ve thought my hand was food because he took a quick nibble at it! Then, I started cleaning the animal habitats, and that’s a lot of what animal keeping is about. It’s not about hanging out and giving animals food. It’s about making sure animals are in safe, clean environments, are eating their food, and regularly going to the bathroom. In short, there’s tons of looking for and cleaning poop, and poop is important because it says a lot about the health of an animal. There was also time for play and enrichment, to provide a stimulating environment and to enhance their general well-being. Still, sometimes animals would poop during play time. Eventually, I was doing everything the full-time keepers were doing – working full-time during my summers and having a blast along the way. 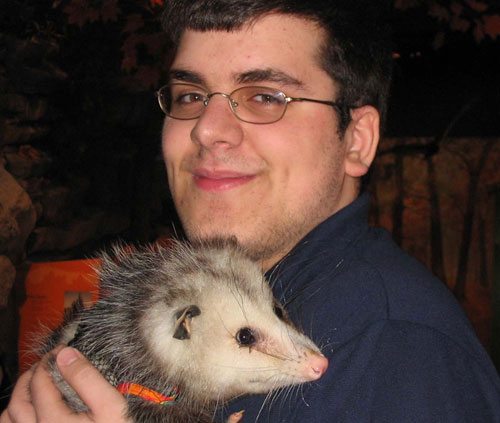 Ginny (Virginia Opossum) liked to poop a lot, but never pooped on me.

I miss my days at the Mini Zoo; when I started college, I dropped by the zoo every time I visited home to see my keeper friends and animal friends. I wish I could urge everyone to go visit the Mini Zoo, but unfortunately during the budget crisis in 2010, the Newark Museum decided to close down the zoo. It seems they gave the keepers only two days notice, and kept only one person to take care of and find new homes for the animals. I felt terrible for this person, as well as the animals: one person could never do everything required to properly care for them, without even considering the time it takes to find them new homes! I really am grateful to the museum for the wonderful experience I had during my time there. But the closing of the Mini Zoo – and particularly how that closing was handled – just stinks, and leaves a really bitter taste in my mouth.