After a botched release of its second massive multiplayer online RPG (MMORPG) Final Fantasy XIV, Square Enix shut down the game and went back to drawing board. Two years later, the development team has returned with a great game, appropriately titled A Realm Reborn. I never played the original version of FFXIV, but have played the latest version since its release. The first week was a little rough, given Square Enix's servers were having trouble handling all the traffic, but things are all good on that front now. After two weeks filled with exploring the world of Eorzea, I must admit I'm impressed...and hooked! 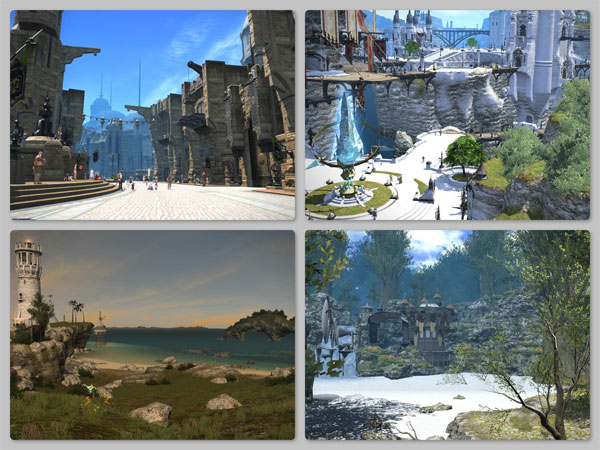 Like any Final Fantasy game, story plays a huge role in this game. There are cutscenes and mandatory story quests that must be completed to unlock additional content. And this isn’t some loose story that dissipates after a few hours; you’ll be going through story quests from level 1 to level 50. Depending on the class you choose, you’ll start in one of three major cities on the Eorzean continent: the verdant forest nation of Gridania, the ocean-side swashbuckling Limsa Lominsa, or the arid mining city of Ul’dah. A few hours in, you’ll have explored one of these cities in depth and visited the other two. 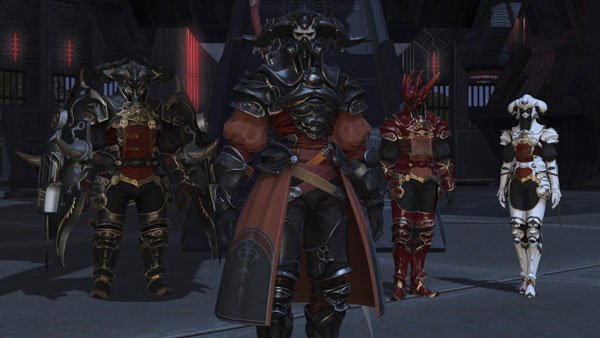 The leaders of the Garlean Empire.

Soon, you’ll learn about the antagonists of this tale. Interestingly enough, the shutdown of the failed original version plays a role in the story. The shut down is portrayed as The Calamity. The evil Garlean Empire (FFI reference to the antagonist Garland) makes a push to conquer Eorzea. Similar to Sephiroth casting Meteor in Final Fantasy VII, the Garleans cause one of Eorzea’s moons, Dalamud, to fall toward Eorzea. As Dalamud approaches, the primal Bahamut emerges from within the moon and devastates Eorzea. A Realm Reborn picks up five years after The Calamity, when your character must contest with the encroaching Garlean Empire, and the overwhelming threat of the primals (summons). The Garlean Empire is like the Gestahlian Empire in Final Fantasy VI: an advanced technological nation with Magitek seeking to conquer others for access to their resources. There will be plenty of the usual MMORPG filler: go kill this monster, go collect this item, and go deliver this package to some inconvenient location. But the story always seems to kick in when this filler starts to get tedious – hooking you right back in.

Art for the Marauder, Alchemist, Botanist, Warrior, and Thaumaturge.

The class system is extremely flexible. There are 5 fighting classes, 3 magic classes, 8 crafting classes, and 3 gathering classes. All these classes are treated equally, and you switch between them by simply switching your weapon. For example, you can fight your way to a mineral node as an Archer, switch to a Miner to harvest resources, and then switch over to an Armorer to craft new equipment. To unlock jobs (specialized classes) you need to get a class to level 30 and another to level 15. I started off as a Lancer, hoping to eventually become a Dragoon, which requires a level 30 Lancer and level 15 Marauder. When I began leveling my Marauder, I found I enjoyed playing a tank class much more, so I stuck with Marauder to 30, got a Gladiator to 15, and now have unlocked the Warrior job. Switching classes is encouraged, easy, and most importantly doesn’t require creating new characters or losing progress. Aside from just checking out new classes for fun, you can learn abilities in those alternate classes that other classes can then use. 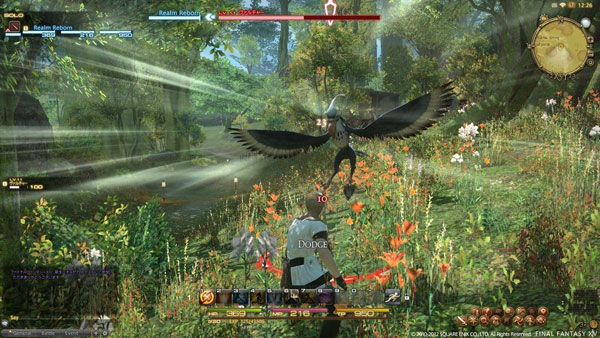 A Lancer at work.

The gameplay itself is fun and approachable. Raiding dungeons is introduced in the story quests; these aren’t difficult, but do require that everyone on the team play their role properly. That said, Square Enix is catering to more hardcore MMORPG players by providing Hard mode versions of dungeons and boss fights, with even higher difficulties slated for future expansions. New mechanics (e.g. materia socketing, battling chocobo companions) are introduced roughly every 10 levels, so if you feel overwhelmed with the amount of stuff you can do at level 10, it’s only going to get worse (in a good way)! The battle system is standard, but enemies will sometimes telegraph attacks by projecting danger zones, giving you a chance to avoid the attack by getting out of the zone. In dungeons, there are even limit breaks – so if you’re a black mage, you can finish off an enemy with the Meteor spell! Crafting is surprisingly addictive: I find myself spending most of my time collecting resources and then crafting items to use, sell, and share with friends. Nobou Uematsu composed the soundtrack to the original version, and Masayoshi Soken took over for A Realm Reborn. I’m not sure how much material was borrowed from the original version, but this game has some really great music: some that pays tribute to the classics, some that are fresh, and others in between. 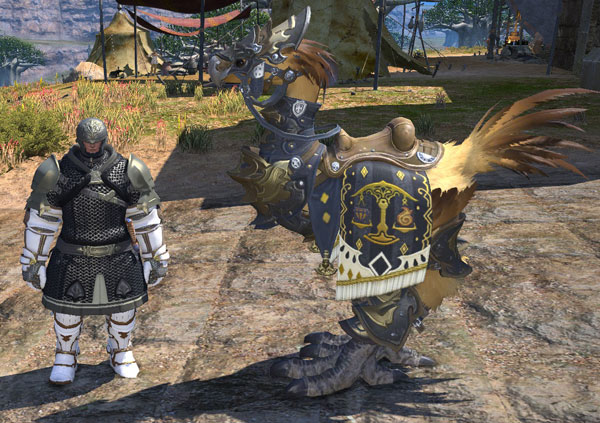 Your chocobo will get you places faster, and even fight with you!

There are still some rough edges to this comeback tale. The inventory management system is a bit unwieldy, but I could be facing the worst of it because I have been dabbling in all of the crafting and gathering classes. The Gear Set system, which easily allows you to manage different equipment sets for different classes is helpful, but could be more useful by telling you which items in your Armory Chest (a special equipment bag) is part of a set. Cleaning up my inventory and Armory Chest has taken up more time than I’d like to admit. The world is also currently inundated with spammers looking to sell gold, but Square Enix has a team dedicated to cleaning up all this noise. There is also a bit of lag and synchronization issues with the server, which results in you getting hit by a telegraphed enemy attack, even though you moved out of the danger zone in time. Square Enix is aware of many of the issues gamers have voiced, and has been very vocal about what they’re currently working on, so the future looks bright for this game. 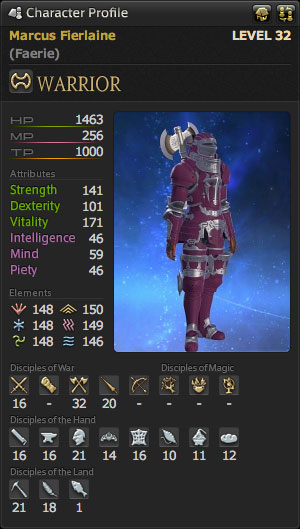 I currently just passed level 30 and unlocked the Warrior job. I’ve gone through the three introductory dungeons, as well as the next three in the story quest, fought a few primals, and am having a blast so far. I’ve spent a good amount of time gathering and crafting, which I find to be really interesting. My friends who are playing alongside me are also admittedly hooked, one going so far as to say “this game is like crack.” Square Enix plans to release major content updates quarterly so “game completion” will likely be an ephemeral state for most.

If you are thinking of checking out FFXIV, create a character on the Faerie server, and add Marcus Fierlaine so we can play together. Happy adventuring! If have any questions about FFXIV or want me to discuss any other elements of the game, send me a tweet.