It's time to keep Kickstarter honest. Founded in 2009, Kickstarter is a crowd-funding platform for people with great ideas who need a little capital to make them happen. If you see a project you like, you pledge a certain amount and based on that amount you are promised a reward if the project succeeds. But there's a catch.

A project can fail; a game developer could misestimate costs and run out of money halfway through development or deals with a manufacturer can fall through. In September 2012, a Kickstarter blog post explained that funding projects on Kickstarter is not like shopping at a store.2 There is always risk, there are always challenges, and people should be aware of that. I’m a Kickstarter junky, so let’s see how well the projects I’ve backed have done so far.

I’ve backed 43 projects on Kickstarter. Of these, 37 have been successfully funded. So far, 14 have delivered the promised rewards. Generally, most people were unable to meet their estimated delivery date. One project delivered about a month ahead of time, and another delivered right on time, but the other 12 ranged from being a few weeks late to a year late.3 Again, Kickstarter is not a store and estimated delivery dates are just that – estimates, and really bad ones at that!

That leaves me waiting on 24 projects. Of these, 9 are still in development, but if history is any indicator, most of them will be late. So what about the other 15? They range from being 3 months late to over 19 months late.4 In this case, what should be considered acceptable and unacceptable? I looked at when each project last posted an update. Updates are emailed to all backers to give them more insight into a project’s status. I’ll be lenient: if a project creator has given us an update within the last 6 months, they’re in the clear. If they have not, well, come on – stuff happens, but updating your funders once every half-year isn’t too much to ask, is it?

Of the 15 late projects, 4 haven’t posted one single update within the past six months. Let’s take a look at each one.

One quick update would have kept these projects off this list. For Christ’s sake, a guy – Edward – with brain cancer posted an update apologizing for his video game project being late.5 His health has been on a roller-coaster ride, yet Edward, who is going through pain I can’t even imagine, still has the common courtesy to update his supporters. You can do it, too. Kickstarter is not a store, but it’s also not a charity drive. You tell us your ideas, we give you support, you do your thing, and we reap some reward – like video games, cool wallets, yummy burger sauce, or at the VERY least, good feels – for helping you. What you don’t do is take people’s money and disappear. 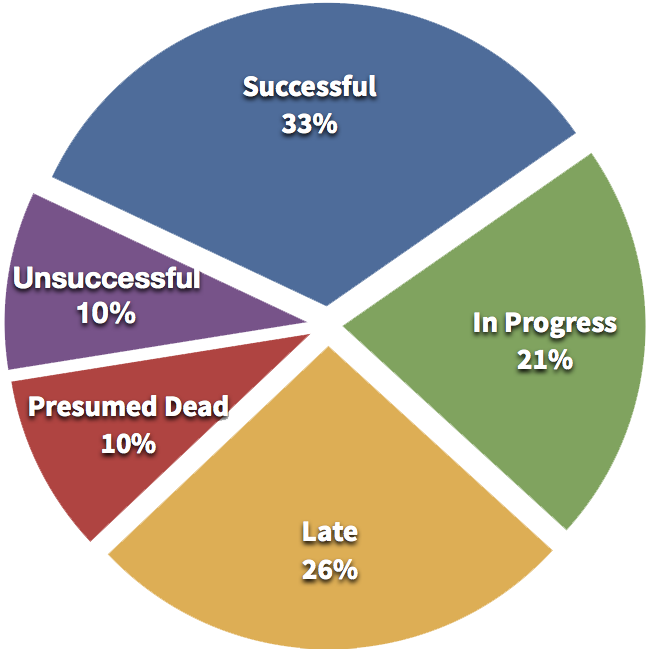 So, is Kickstarter risky? My experience suggests that a few people may just take your money and run, or something akin to what the 4 projects above have done. But generally, most people seem to be making steady progress, and most will take longer than planned.

How does Kickstarter help hold project creators accountable? Not well. All the data I used to write this post was compiled6 by myself since Kickstarter does not provide any tools to track progress on backed projects. I would suspect, though, based on my own experience with projects, that if Kickstarter made this data readily available, the numbers would not look good. In a glance, backers would feel like they’re losing money, and that is never good for business. So instead, they just write blog posts telling potential backers that there is always risk – covering their own butts, but helping me none. As always on the interwebs, proceed with caution.