Who's Behind Bad UX at GOM TV?

UI and UX designers battle ferociously to create something that is both beautiful (UI) and a pleasure to use (UX). When I interact with something that isn't gorgeous and functional, I blame a flaw in this holy union. When something is beautiful, but totally hard to use, I blame the UX designer. When something feels awesome to work with, but is freaking atrocious to look at, the UI designer takes the blame. But earlier this week when I went to watch some StarCraft 2 videos, I learned that behind every bad user experience, there isn't always a bad UX designer or UI designer. Sometimes, things are just out of their hands.

I unabashedly admit to watching a lot of professional StarCraft. GOM TV, based out of South Korea, has been producing top notch StarCraft 2 content since September 2010 and I’ve been eating it up since then. I catch the videos on demand (VODs) of matches on the days following the actual matches. The other day I logged on to watch the 5th place decider matches. Basically, the 4 players who lost in the round of 8 were competing for the 5th place. There are two matches and the winners of those two matches proceed to a third match. The winner of that third match gets the coveted 5th place prize. When I went to the list of VODs, my experience was less than ideal.

What's wrong with this?

Turns out this list of videos spoils the result of a match! Recall that Match 3 will be between the winners of Match 1 and Match 2. Who’s that devilishly handsome Korean in the screenshot of Match 3? The winner of Match 1. Knowing who is going to win ahead of time ruins some of the fun of watching Match 1, yet this isn’t an issue of bad UX or UI. It is true that the screenshots themselves are a liability for mistakes like this, but without them, the list of videos would be an intimidating wall of text. Whether these screenshots are generated automatically from the video or someone manually selects the screenshot, this is a case of content negatively influencing the user experience. But if you’re hankering to blame UX designers, you can always play the blame game and argue that they should’ve written specifications that included, “Do not spoil results of matches in preview screenshots.”

I’m not here to bash GOM TV. This is a pretty simple mistake that can be easily corrected. Compared to the other VOD hosting site, Twitch TV, GOM TV does an amazing job at not pissing me off, so hats off to them. I sent a tweet to GOM TV; here’s to hoping they clean this crap up! 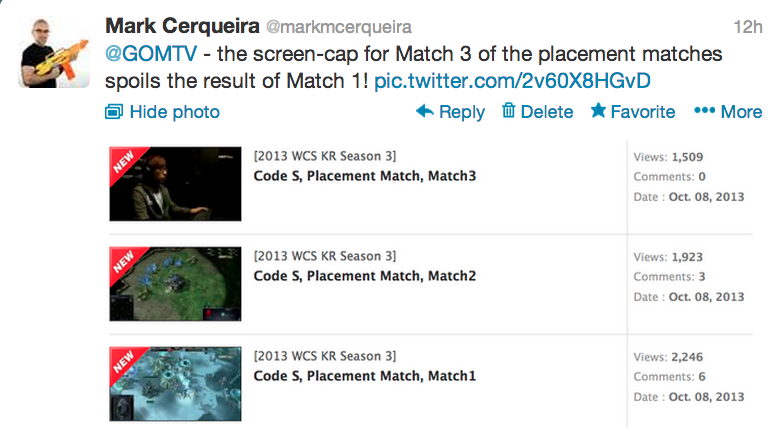 UX activism — cleaning up the internet one issue at a time!