Cooking With My Grandma - Rabanadas

Your grandma is usually the best cook you know. My grandma, at least, is definitely the best cook I know. Funnily enough, if we’re friends, my grandma is also likely to be your favorite cook. This past holiday season, I shadowed my grandma while she prepared a traditional Portuguese holiday dessert: rabanadas. I always tell my non-Portuguese friends that it’s similar to French Toast. 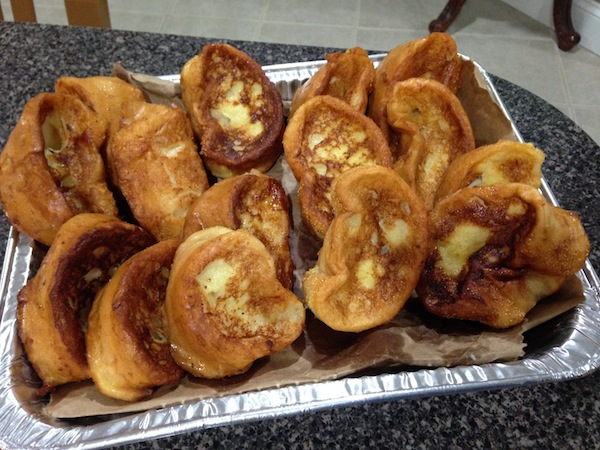 My grandma doesn’t use recipes – or even measuring utensils. Somehow, the result is always consistently great. Shadowing her, I wasn’t looking to extract an exact recipe out of her, but just to get the basic steps and to get useful tips. Here’s my go at trying to capture some of her cooking magic.

To put what’s coming up in context, the general steps to making rabanadas is: cutting bread, soaking it in milk, soaking it in eggs, and finally frying the bread. I observed my grandma whip up four dozen.

1. Prepare the milk. In your large, stove-friendly pot add a generous amount (about one liter) of milk. Take a lemon and skin it; add the skin to the milk. Be careful - don’t add any lemon flesh! The rind and white spongey layer is okay. Then add two whole cinnamon sticks, about 6 spoonfuls of sugar, and some honey (optional). Then warm this up on the stove a bit to help everything dissolve and blend together. If you run out of milk later, you can just add more milk (and sugar) to replenish your supply. 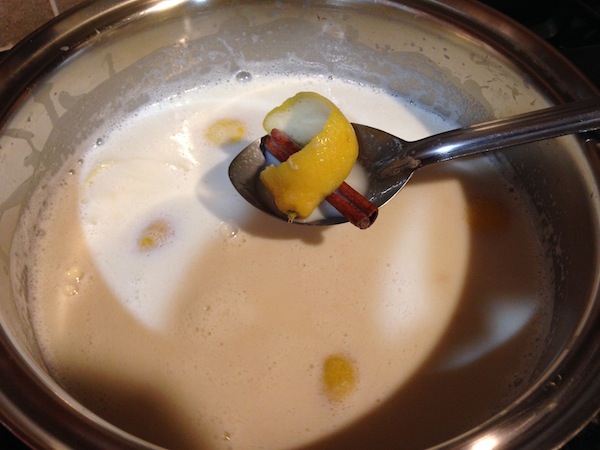 2. Whisk the eggs. You’ll want about 3 eggs for every dozen rabanadas. Put them in a pan and whisk them. 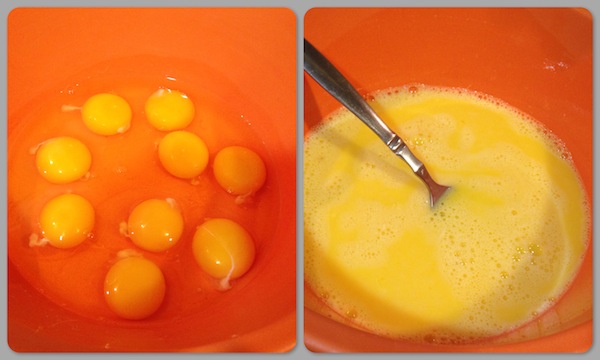 3. Set up the strainer. Later, you will be dipping the bread in the eggs. When you do that, you’ll want to let some of the excess milk and egg fall off before putting the bread in hot oil. Thus, why you need a strainer. Put your strainer in a pot, and you can recycle the liquid that falls out and put it back in the whisked eggs pan. 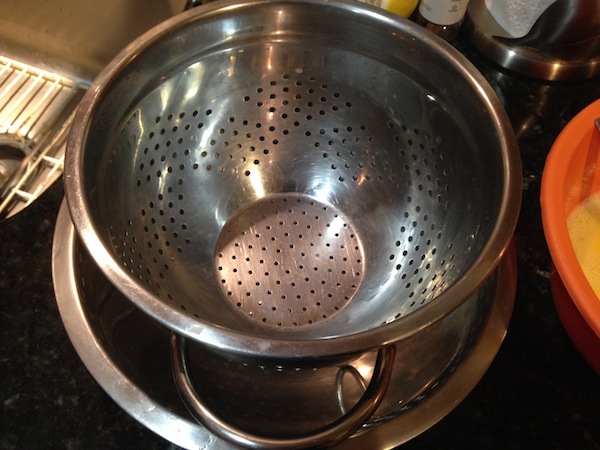 4. Add oil to the frying pan. My grandma puts about 1 cm of oil in a frying pan. At first, the stove was set to 7/10 but as the oil got hotter, she brought it down to 5/10. After each dozen rabanadas you make, my grandma recommends changing the oil. As you cook the bread, small pieces will fall off, and in the hot oil, those pieces will burn up. You don’t want pieces of burnt bread on the finished product! 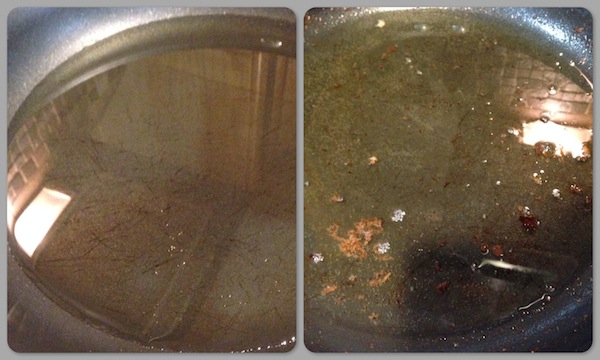 Fresh oil (left) and oil after frying some bread (right).

5. Prepare your “landing zone.” A proper “landing zone” has something that will soak up the oil, but not fall apart. My grandma uses an aluminum tray with the paper from the paper bag the loaves come in. This is likely the only recorded instance of my grandma “recycling.” Don’t use paper towels because my grandma said so. 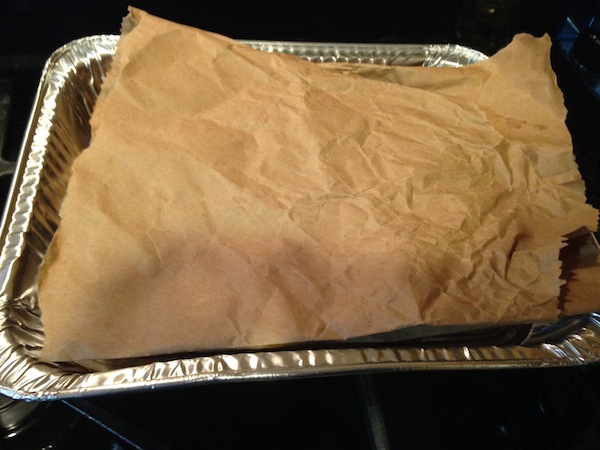 6. Cut the bread. My grandma just says “cut the bread,” but she actually made every piece of bread consistently 1.5 inches wide. 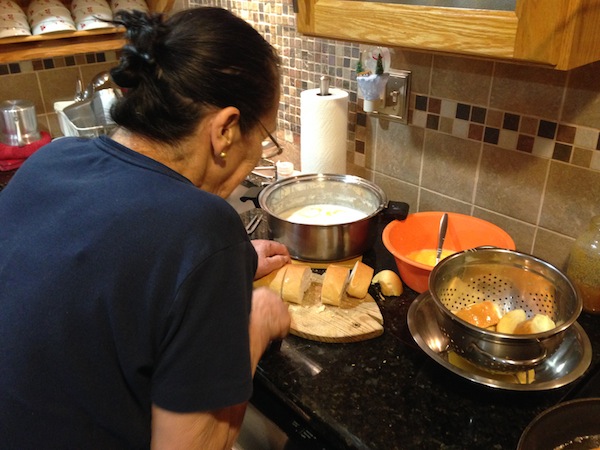 Once you’ve done all the prep work, set up everything like the picture below. You’ll work your way from left to right now. 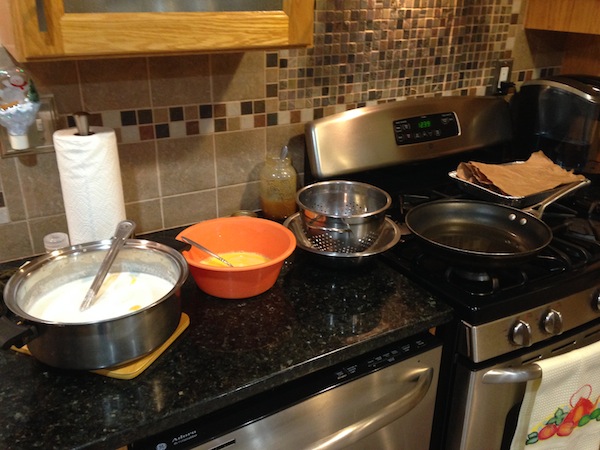 Start on the left and work over to the right.

2. And then into the eggs. Moving on, you’ll put the bread into the pan with the whisked eggs. This part shouldn’t take too long; my grandma didn’t leave the bread in there for longer than half a minute, ever. Just get some egg on there, and move on.

3. Drain excess liquid. Before putting the bread into the frying pan my grandma puts the bread in a strainer for a minute or so. This lets any excess liquid drain, which cuts down on the pain you’ll experience if hot liquid starts popping out from the frying pan! If you’re running low on eggs, just use the liquid that drains out in this step to refill your egg pan. 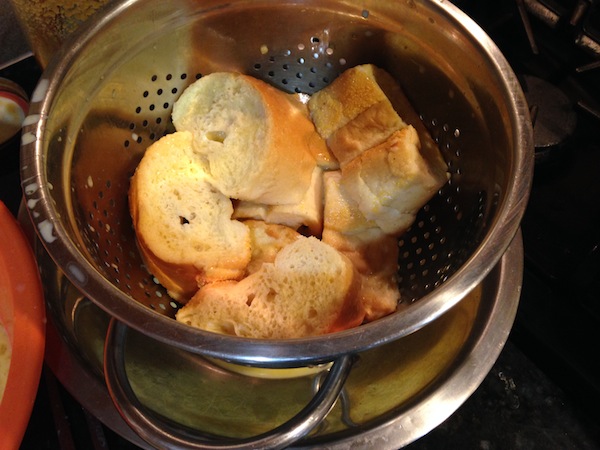 4. Fry the bread. The general steps are 1) fry one side until golden, 2) flip the bread, and 3) fry the other side until golden, before taking it out. Grandma says you should avoid flipping it more than one time because you will absorb more oil, so feel free to lift the bread up a little bit to double-check before you flip it over. It takes about 2 to 3 minutes of frying on each side to hit the sweet spot, although the time will vary depending on how hot your oil is. Once both sides are golden, carefully remove the bread (grandma uses a barbecue fork) and place them in your “landing zone.” 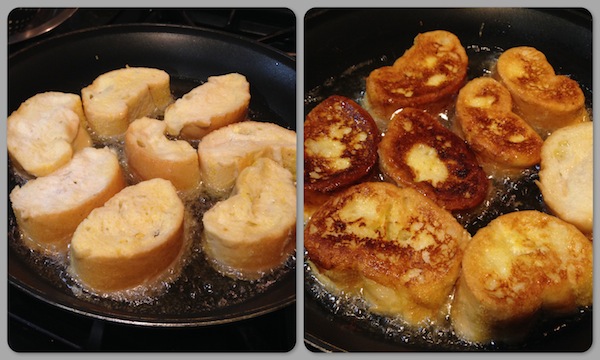 Rinse and repeat until you’re out of bread and you’re done!

It doesn’t seem so hard, but I know the minute I try to do it myself, I’ll totally screw it up. That said, rabanadas seem like a good first excursion into attempting to cook Portuguese dishes! Bom apetite! 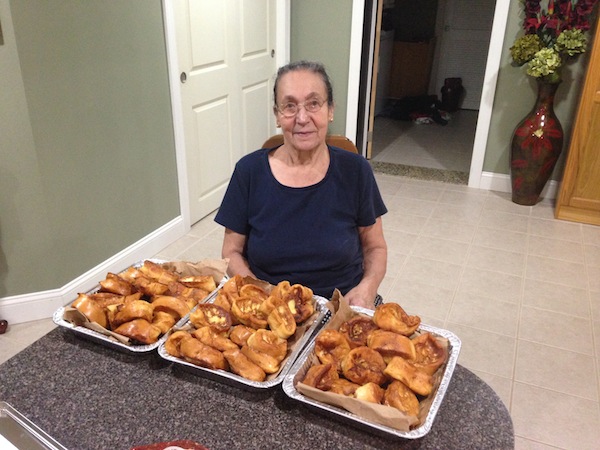 The cook and the rabanadas.