Kicking the Tires with PayPal

This week, Apple announced that Touch ID APIs would be available for use by third party developers. These new APIs allow developers to use the fingerprint identity sensor to authenticate users. Curiously enough, Paypal has come forward to inform us that their developers attended a session on integrating Touch ID into their app. A source at Paypal is quoted saying, “It seems to be a fairly easy API to use, but we’re still kicking the tires” in a Business Insider article.1

Kicking the tires? Before you start questioning the quality of this new API or even contemplating integration, why don’t you reflect on the current state of your iOS app? I have two-factor authentication enabled on my PayPal account. After all, I don’t want ONLY a password to be between a bad person and my bank account. But guess what happens when I try to log into PayPal on my iPhone. 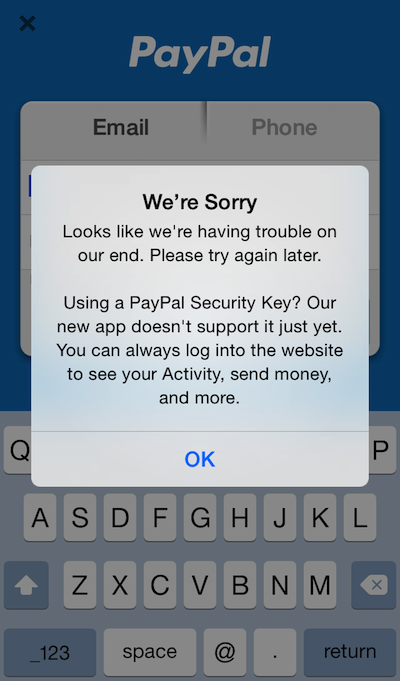 Are you kidding me? I actually need to choose between having two-factor authentication or having access to PayPal on my mobile device. Why would a company, which deals with a person’s finances, put their customers in this kind of position? Why would they implement a security feature, but not support it across all platforms? Why don’t you “kick the tire” on your existing subpar (very generous by the way) app before you even start contemplating adding the bells and whistles of Touch ID?