The other day I was digging through some email and found an email thread with fabulous AP Computer Science teacher, Mr. Gironda. The attachments? My very first submitted programming assignment in Java. Fun fact: we called these assignments programming projects or PPs.

Here is a gist of the PP code. 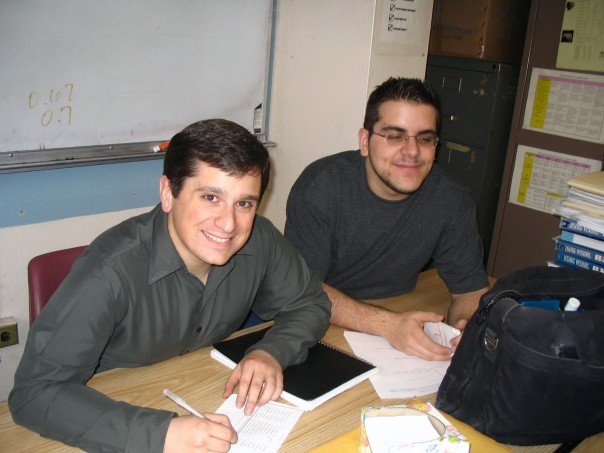 Mr. Gironda and me when I had hair on my head!

The PP involved programming a dumb ATM. Mark of 2005 helpfully left a comment to explain why it was dumb: “user inputs how much money they have to begin with, which is why the ATM is so dumb. Other than that I would consider this ATM a superior form of intelligence.”

Here's me calling a static method on an instance of the class...

Looking at the code (which wasn’t 100% correct), I realize not a lot has changed between me and Java, except my coding style: I switched from Allman to K&R indentation and I always use braces even if my conditional only executes a single line of code. I also check for null and try-catch excessively now because, as we all know, that’s all that separates amateur coders from professional developers.

Java – the programming language – hasn’t changed much and I don’t think that’s a bad thing. I’ll gladly take syntactic sugar updates (e.g. look at declaring an array of numbers in Objective-C before and after 2012), new APIs, and anything that makes me write less boilerplate code. But I don’t expect or really want a language to fundamentally change. A spoken language doesn’t radically change overnight; words and concepts pop up, some die, some survive, and it feels natural because it’s never too large a leap from where it started.

Stay old, Java. If we’re really craving something fresh, we can always count on Gradle to drag it in.