I Was Wrong. Do Not Just Google It

When someone asks me how to I learned about computers I tell them “just Google it” and you’ll learn too. But I need to add a caveat to that.

A friend contacted me the other day saying he was trying to set up a Canon printer so he Googled “cannon printer setup,” clicked on the first link, and called the support number. The support technician had him scan his computer (by executing some remote scripts from the command-line), and told him he had no firewall, his computer was 60% infected with malware, and once it hit 90% malware mark the entire computer would crash. To solve this malware problem the technician asked him to purchase a firewall from Canon.

How was a number to an obvious scam the one link he clicked on when he did a Google search? I never saw this type of thing, but I also have an ad-blocker installed. Without it, my typical mantra of “just Google it” becomes a lot more dangerous because the top links on the Google search results are links to telephone these “support” centers. 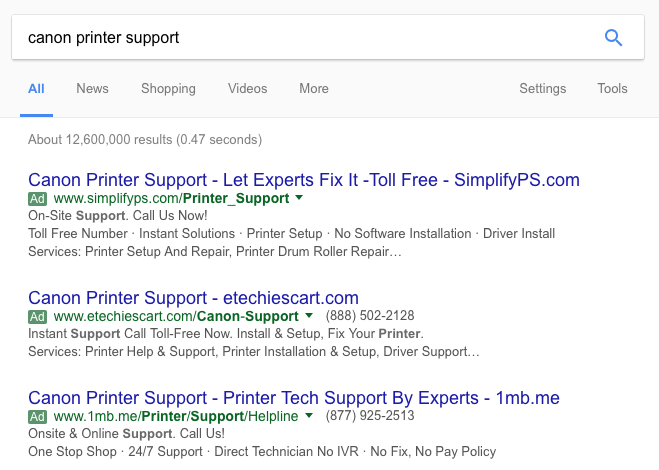 These are not the sites you are looking for...