After ten long years, Final Fantasy XV has been released! Two weeks after the release, I’ve plowed through most of the side-quests and completed the main storyline. And I enjoyed it! The game does a lot of things right: the battle system is fun and fast-paced, the story pulls you along without being overly complicated, the music is excellent, and the main cast of characters are personable and make the entire trip funny and interesting. The photographs Prompto, one of your team members, takes throughout the journey was unexpectedly awesome too!

But the game certainly has some flaws.

The latter half of the game is completely rushed. This game took forever to make so that leaves me confuddled. It’s not Xenogears Disc 2 rushed, where the protagonist sits on a chair and tells you what’s happening, but it’s still pretty bad. The game could’ve maybe done a little of the Xenogears Disc 2 style to help fill in the obvious blanks to make the story flow a bit better at the end. The story is good and main villain in this entry is exceptional. It’s sad to see that all get squandered by resource and time constraints.

The sidequests also left a lot to be desired. Some of them are fun and challenging (e.g. trailing and slaying the Behemoth to get access to Chocobos), but a lot of them are simple fetch or kill quests that don’t relate at all to the main story. The game also has a bounty hunt system where you can go out and hunt powerful enemies. But you can only accept one of these quests at a time and you must report one quest before taking on another. Limitations like these seem to be put in place purely to extend the longevity of the game in non-productive ways.

The first open-world Final Fantasy game also has far too many frustrating invisible walls. There are many roads that cut across the open world (great for driving on with your car) with grassy lands straddling both sides; not being able to jump over the edge of road with my Chocobo and having to find the stairs was extremely frustrating. Many trees are also walls so I quickly learned to steer very clear of them. For a point of comparison, in Xenoblade Chronicles (Wii), you could actually jump off the edge of the world and in Xenoblade Chronicles X (Wii U), you could swim from one continent to another!

By the end of the game, I was super invested in the four main characters, but the game does a poor job of fleshing out the secondary characters and making the player care about them. There are way too many characters that just don’t get enough screen time. Obviously fixing the rushed latter half of the game could address this. And perhaps incorporating these characters or their stories into sidequests would also address how unimportant sidequests felt. I really feel like the universe in this game has a lot of interesting characters; it’d be great to see them developed some more. 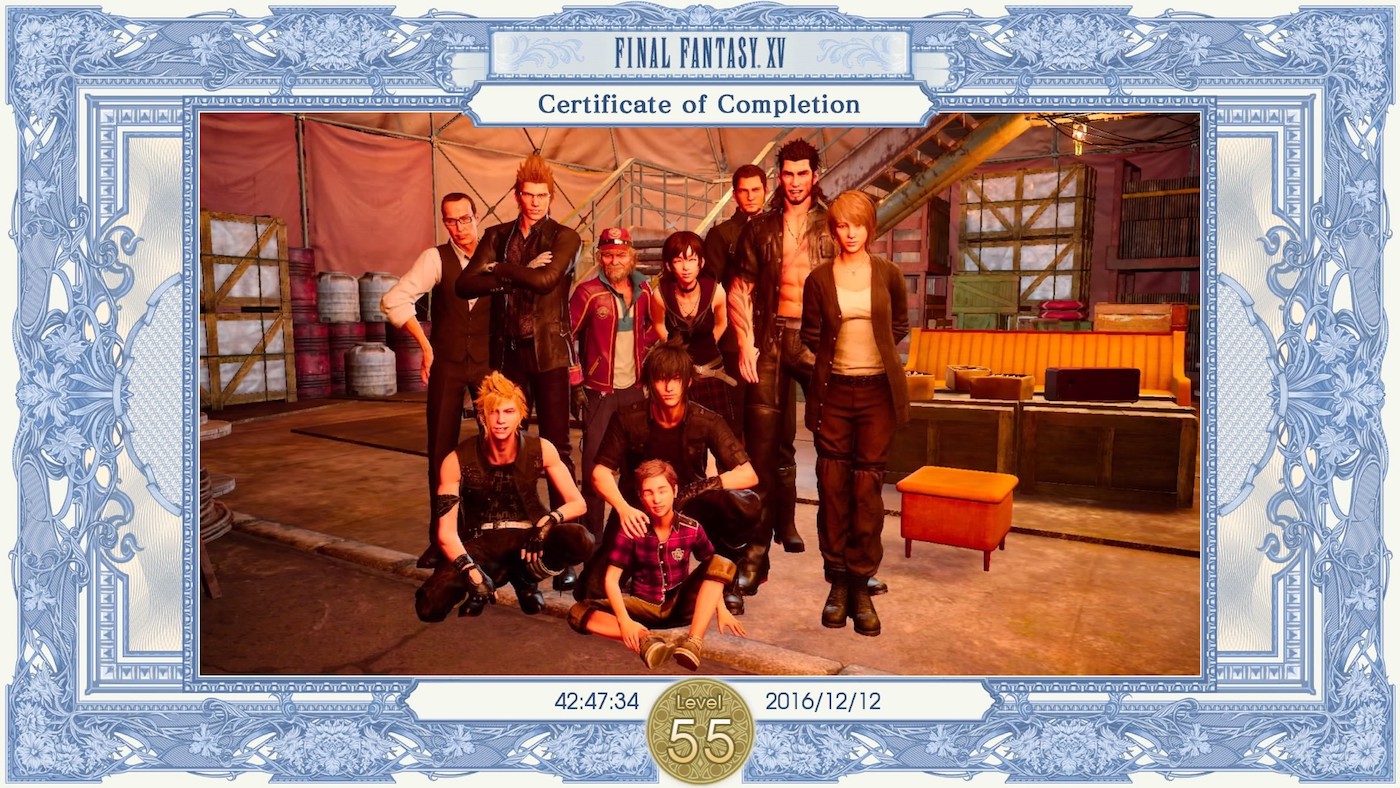 A very quaint certificate of completion!

That said Final Fantasy XV is a great entry in the series and I think it’s exactly what the breath of life the series - that many say has been languishing - needed. Developers have already said they are tweaking the latter chapters in the game and have lots of downloadable content planned. I hope the Final Fantasy team can take the learnings from this entry and improve on it in a shorter amount of time in the future!