People come up with the best comebacks in the shower long after the comeback would’ve been useful. The other day I came up with a sick MTG play in the shower and alas, it was too late to be useful!

Rewind to a couple of weeks ago after the weekly mobile team Ixalan draft at Twitch. I drafted a (shockingly) coherent mono-white Vampires deck and was facing off against MTG Online semi-pro Wumpkins (twitch.tv/wumpkins) who was wielding a Merfolk deck.

Somehow I got myself into a position where I had 37 life points and Wumpkins had a single one left. The #HeartOfTheCards was with me this game. My win condition involved getting only one more creature than Wumpkins, but turn after turn I was unable to secure the necessary board advantage. After River’s Rebuke returned all my creatures to my hand, wiped out all my beautiful 1/1 Vampire tokens, and a friend’s wedding I was about to be late to I forfeited…

Only later in the shower did I realize I could’ve won! 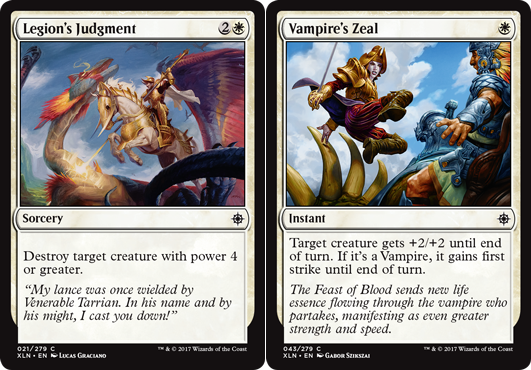 I missed some magical synergy here!

I had these two cards in my hand for a while. Legion’s Judgment could clear a single creature but none of Wumpkins’ creatures had 4 power or greater so it sat in my hand. Vampire’s Zeal could power up my creatures but that wouldn’t get me the win so it say in my hand.

My shower play: use Vampire’s Zeal to power up one of Wumpkins’ creature to 4 power and then remove it with Legion’s Judgment. It would’ve been glorious, but alas the thought did not strike me at the right time.