Rivals of Ixalan - My Top Pick

Rivals of Ixalan has been out for a week now so Jeff and I have had plenty of time to pour over all the cards released in this expansion. Draftaholics Anonymous currently ranks some crowd-favorites Ravenous Chupacabra and Rekindling Phoenix at the top but my top pick from Rivals is sitting at 18: Dire Fleet Poisoner. 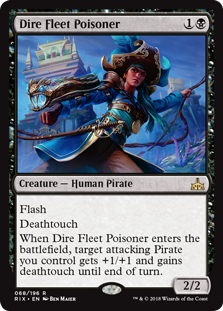 At two mana it’s super cheap and once you reveal your first Dire Fleet Poisoner, your opponent’s may hesitate to swing with a big body until they’ve got something of their own to counter this amazing card.