Next up in the Manager Reads adventure is The Culture Code: The Secrets of Highly Successful Groups by Daniel Coyle.

Who recommended the book? This book was highly recommended by my team’s VP of Engineering, Michael Comperda, and selected as the next book for the Twitch Leadership Book Club. How is a book selected for the club? At the end of each meeting we carve out some time for people to recommend books and champion a particular book for the next month’s meeting. Then we coalesce on one and that’s it! We keep a running list of all recommendations that we don’t select and revisit that list during this time as well. 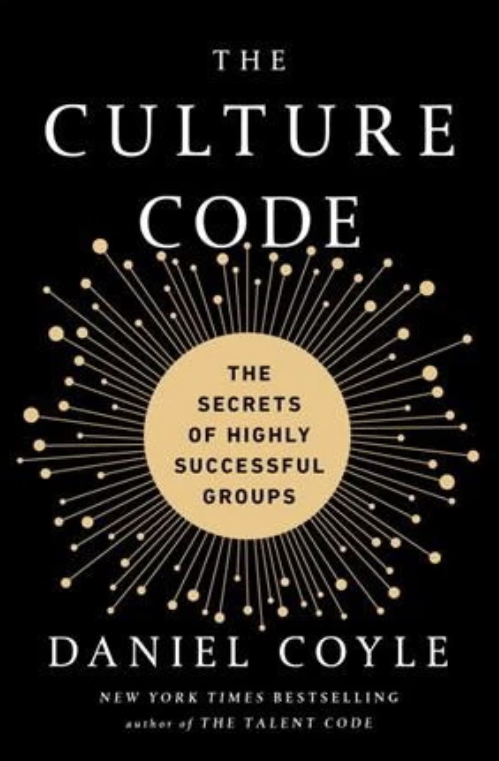 Judge the book by its cover, font, page quality? The hardcover version of The Culture Code sports a simple linear display of its stuff: title, a sun-looking image thing containing the subtitle, author, an award the book received, and the title of another book the author published. It’s straightforward although the spores coming from the sun thing almost touching the title and the author makes my skin tingle. Inside we’ve got thick paper and sans serif font for chapter titles but a font with serifs for the actual text.

Thoughts on the book and the big take-aways? When teams are greater than the sum of their individual parts you have a strong group culture acting as a force multiplier on that team. Don’t have strong culture or want to figure out what you’re inadvertently doing that is yielding such positive results? Coyle breaks forming a strong culture into three steps:

Each of these three ideas gets several chapters dedicated to them: one to introduce the concept, a few to dive in and cover some real-world stories, and a final chapter that explicitly spells out things we can do to put that idea into action.

Favorite quote from the book? “Laugher is not just laughter; it’s the most fundamental sign of safety and connection.”

Elevator pitch for suggesting (or not suggesting) the book? Read this. If you’re on a team with a great culture, you’ll arm yourself with insight to understand why that team functions so well. If you’re on a team that has room for its culture to improve, you’ll be armed with tools to start improving things. Whatever state your team’s culture is in currently, it’s impacting your team’s ability to succeed. If you’re currently at 1 + 1 = 1, aim for 1 + 1 = 3. If you’re at 1 + 1 = 3, aim for 1 + 1 = 10. It’s absolutely worth the time and effort.

Notes in Evernote? This book is packed with nuggets of wisdom that can help build better teams. Feel free to review my notes on 🐘.