Manager Reads - Turn the Ship Around!

Keeping with books written by authors with a military background, the 11th book in the Manager Reads saga is Turn the Ship Around!: A True Story of Turning Followers into Leaders by retired U.S. Navy captain David Marquet. Yes, that exclamation mark followed immediately by a colon is killing me softly.

Who recommended the book? This book was recommended by a member of the Twitch Leadership Book Club. The club focuses on reading books aimed at leveling up our leadership and management skills. 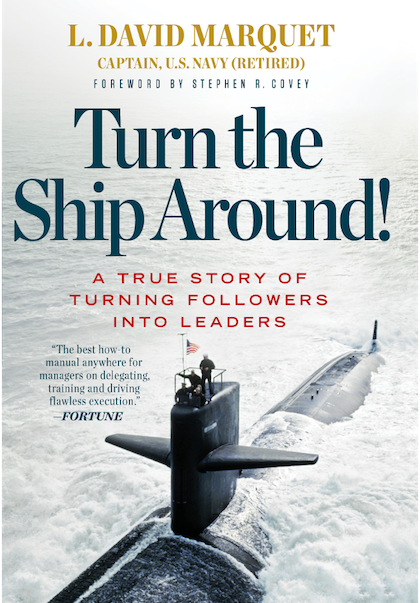 Judge the book by its cover, font, page quality? I like the cover of Turn the Ship Around mostly because it has a nuclear submarine on it which is undoubtedly cool. For those who aren’t impressed by a nuclear submarine perhaps the quote from Fortune magazine declaring this book “the best how-to manual anywhere for managers” will get you to pick this one up. The kerning between the T and u in Turn is way too tight though; the T encroaches heavily over the u. Inside the book are pages thick enough to resist highlighter. Font and the rest aren’t noteworthy which in itself is 👍.

Thoughts on the book and the big take-aways? The core of Marquet’s transformation of the Santa Fe from one of the worst submarines in the Navy to one of the best was shifting the team on board from the leader-follow structure to the leader-leader structure. Instead of the traditional model where there is a single leader and the rest of the organization following that individual, the leader-leader posits that everyone can be a leader and that organizations will be better served by everyone stepping up to be a leader.

To make this transformation Marquet focused on first divesting control and then focusing on improving competence and clarity to support that divested control. For each of these three pillars, Marquet offers mechanisms to achieve them. Here are my favorite mechanisms for each pillar:

Marquet tells us a story that includes failures, small wins, hiccups, bigger successes that ultimately turned the Santa Fe into a very well run submarine that went on to produce many leaders long after Marquet departed. It’s a powerful story and even though a nuclear submarine isn’t a typical nine-to-five job all the mechanisms and learnings can be applied to everyday work.

Favorite quote from the book? “A vast untapped human potential is lost as a result of treating people as followers.”

Elevator pitch for suggesting (or not suggesting) the book? After reading ten leadership books I finally picked one that told a story over the entire length of the book and it 👏 was 👏 great. Marquet’s story of turning the Santa Fe around is moving. Leadership is consistent work and never-ending; even if someone is given a high-functioning team, we can always do better. Why not make leadership a team activity for everyone then? Marquet’s breakdown of the things that brought him success show that the path can be practical and is applicable to work everywhere. Read it!

Notes in Evernote? While my notes may cover the mechanisms Marquet used to turn the Santa Fe around they certainly don’t capture the enthralling narrative of that journey. You can review my notes on 🐘.