Taking Tales to the Next Level with Tales of Arise

The Tales series has reliably produced solid JRPGs for a long time now. From the first entry I played, Symphonia (2004), to the list-topper Vesperia (2008), and more recent entries like Berseria (2016) there’s a lot to be excited about if you’re a JRPG fan and a new Tales game is announced. It won’t be the game you’re most excited about for the year but it’ll be a solid romp nonetheless. After blasting through Tales of Arise to 100% completion in two weeks because it was so good, I’m rethinking how excited I should be for future Tales games because Arise was a fantastic game through and through. 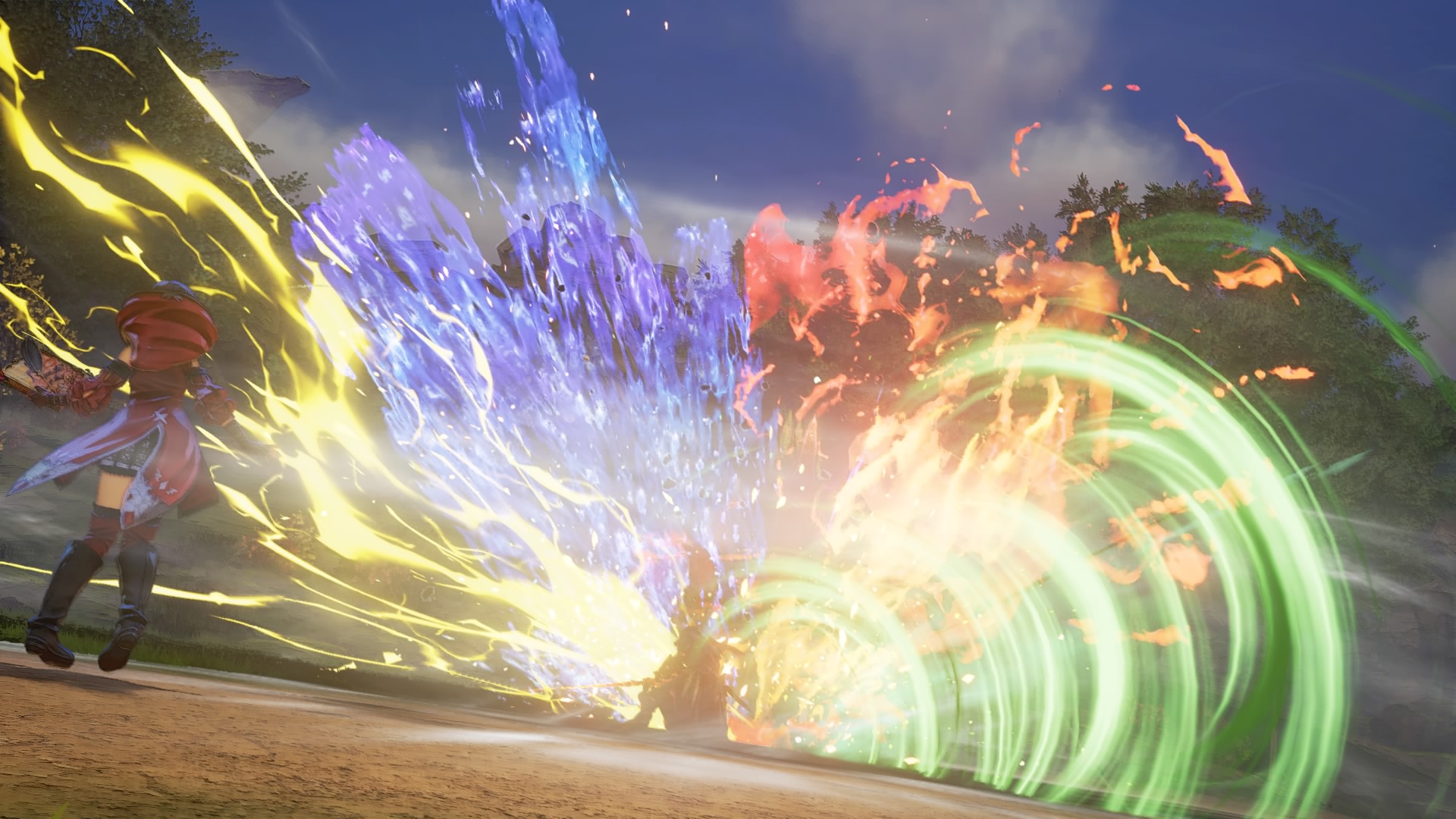 Combat is fast! From start to finish most battles with trash mobs took between 30 and 60 seconds. This speed was achieved in large part with the Boost Strike mechanic that required breaking enemies by stringing together consecutive hits. Once an enemy is broken two characters would team up and deal a massive amount of damage. I’m not sure how damage works here but it seems like there was some AOE element to this strike because oftentimes battles would end right then even if there were multiple enemies. Boost Strikes were also fast only taking about 5 seconds each. The screenshot above is my favorite one. They look awesome and I was playing Arise on the weakest option (PS4) of the three platforms (PS4, PS5, PC) it’s available on. Following a battle most JRPGs show the rewards (e.g. experience, skill points, gold) you get on a victory screen but Arise just dumps you right back into the overworld and shows the rewards there. It’s the first time I’ve seen this and makes the traditional victory screen look like a waste of time although there were many times I leveled up and did not know it happened. 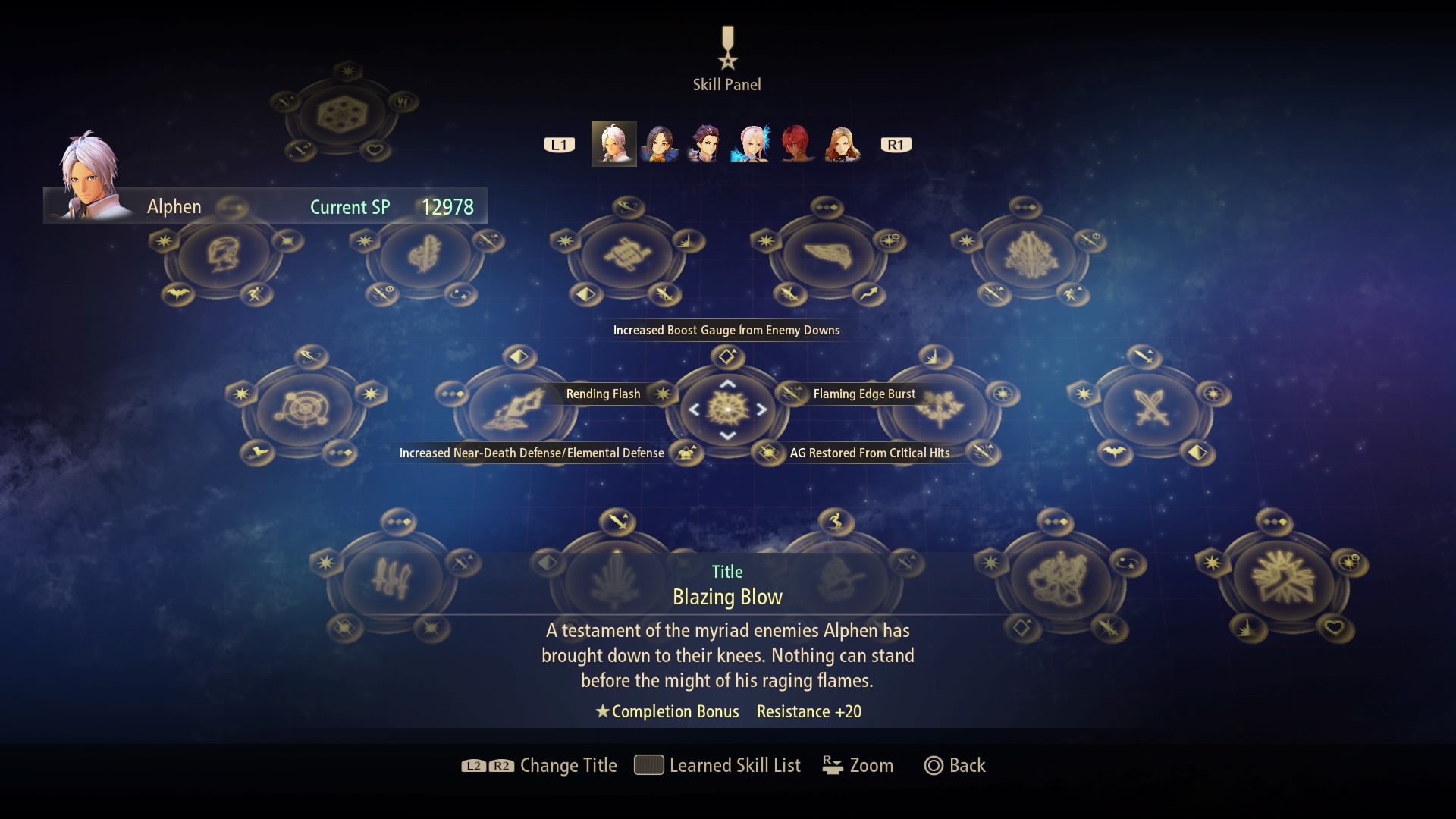 Looks somewhat like FFX's Sphere Grid but not quite

Growth and equipment mechanics are generally good too. Battles give you Skill Points (SP) which can be allocated on a Sphere Grid type structure to unlock new artes and permanent buffs (e.g. increase AG pool so you can use more artes in one go). The grid grows as you acquire more titles by either completing story events, bonding with party members, or cooking certain foods. Each panel has five thing to unlock and once you unlock them all your character gets a hefty stat boost like Attack +20. It works but there are so many things to unlock I stopped reading after a while and just marveled at the new things my party could do in battle afterwards. The equipment system is generally good. You equip a weapon, armor, and one accessory. You get weapons through a simple crafting system: find the materials and pay some gold and you’re good to go. Armor is found in chests or purchased at stores. The accessory system was a bit much though. You can find ores around the world and then use them to craft accessories. You can then use extra ore to level up your accessory and then you can have one accessory eat another accessory to take one of its abilities. I just made some accessories early game, leveled them up to max, and then never looked at the accessory crafting system again. 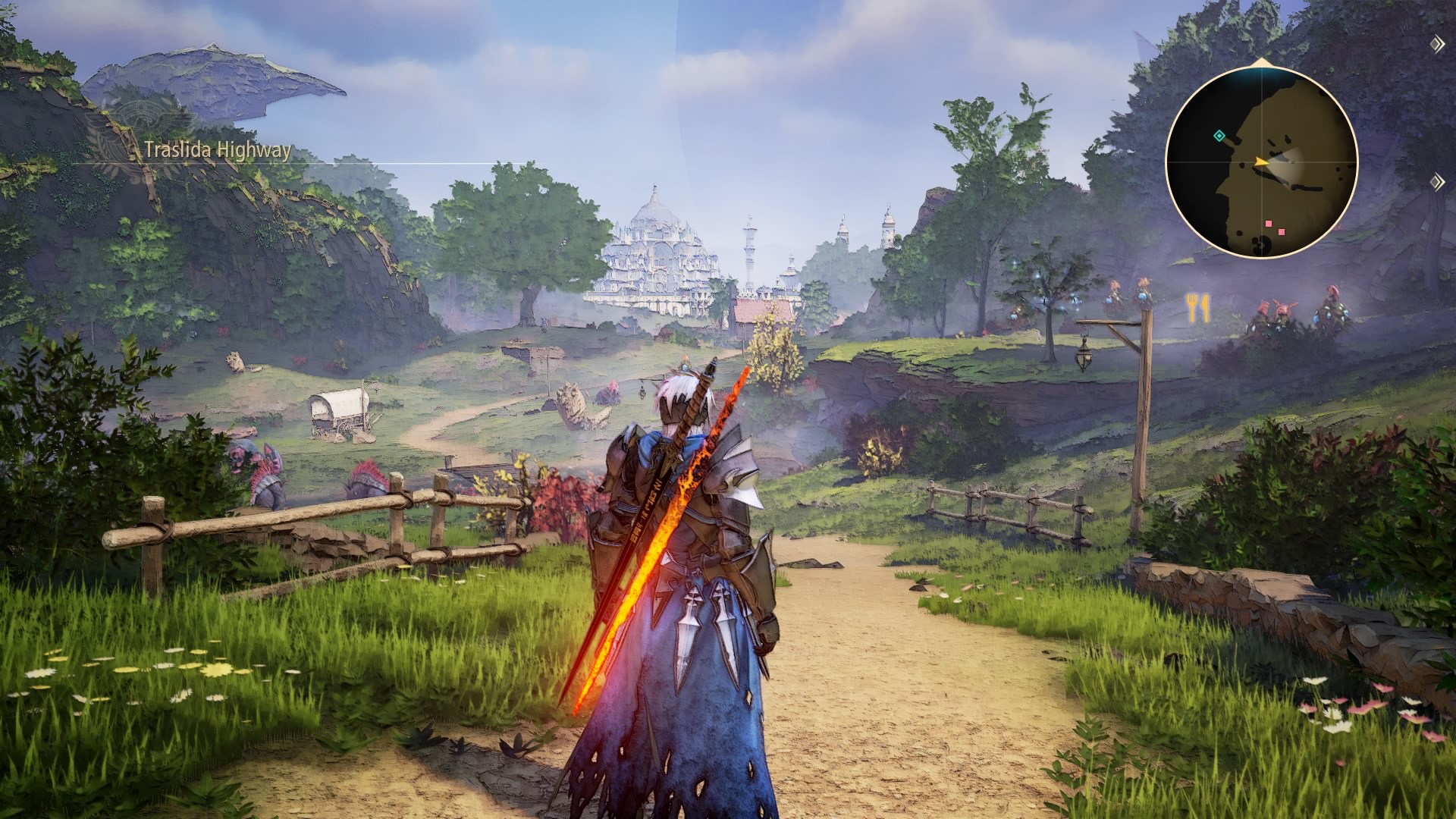 The world is beautiful and the story keeps you playing. Having the first arc on Dahna broken up into five regions each with a dominant type of astral energy makes the world varied and interesting. For example, you begin your journey in Calaglia where almost everything is on fire. Each region has its own problem that needs solving as well as a distinctive look to along with it. The story starts out strong - each region you visit has its own flavor of problems caused by the centuries-long oppression of Dahna by Rena. The second half of the game has a lot of questions to answer and it does come through in the end but a lot of this feels rushed as you get a lot of answers via a conversation with a new character introduced late in the game. It works but the pacing felt off and you are given so much new information it’s a bit hard to make sense of it all in the few huge servings you’re given. While the pacing at the end could use some tweaking unlike most Tales games that sometimes seem to drag on, Arise felt just right in terms of length. 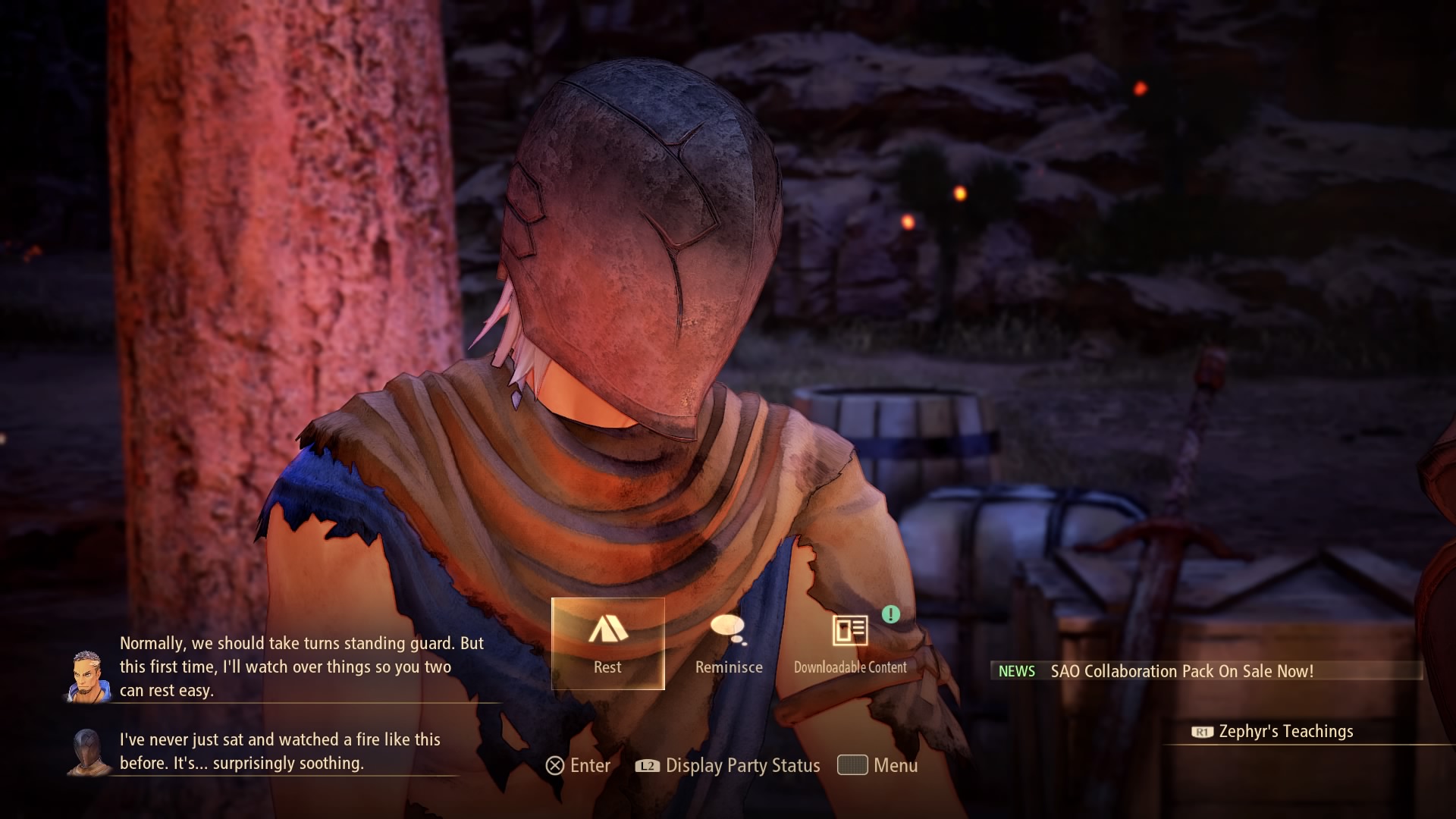 The DLC for this game follows the trend but treads new, unpleasant waters. There is plenty of DLC to purchase for Arise and much of it is stuff you can find for other JRPGs: costumes for your characters, packs of items to bootstrap your party, level up boosts, and new quests to take on. My thoughts on fast grinding have evolved since I first touched on them in 2013 but as a parent the option to level up more quickly is much more appealing now; time is limited these days so having something to help cut down on the grinding is helpful. For what it’s worth, Arise does allow you to set the difficulty to Very Easy which makes everything a cakewalk without grinding and without spending money. Arise treads new waters by advertising DLC on its title screen and when your party sets up camp. The latter feels particularly invasive and pretty annoying given I found no way to turn them off without disconnecting my PS4 from the Internet. 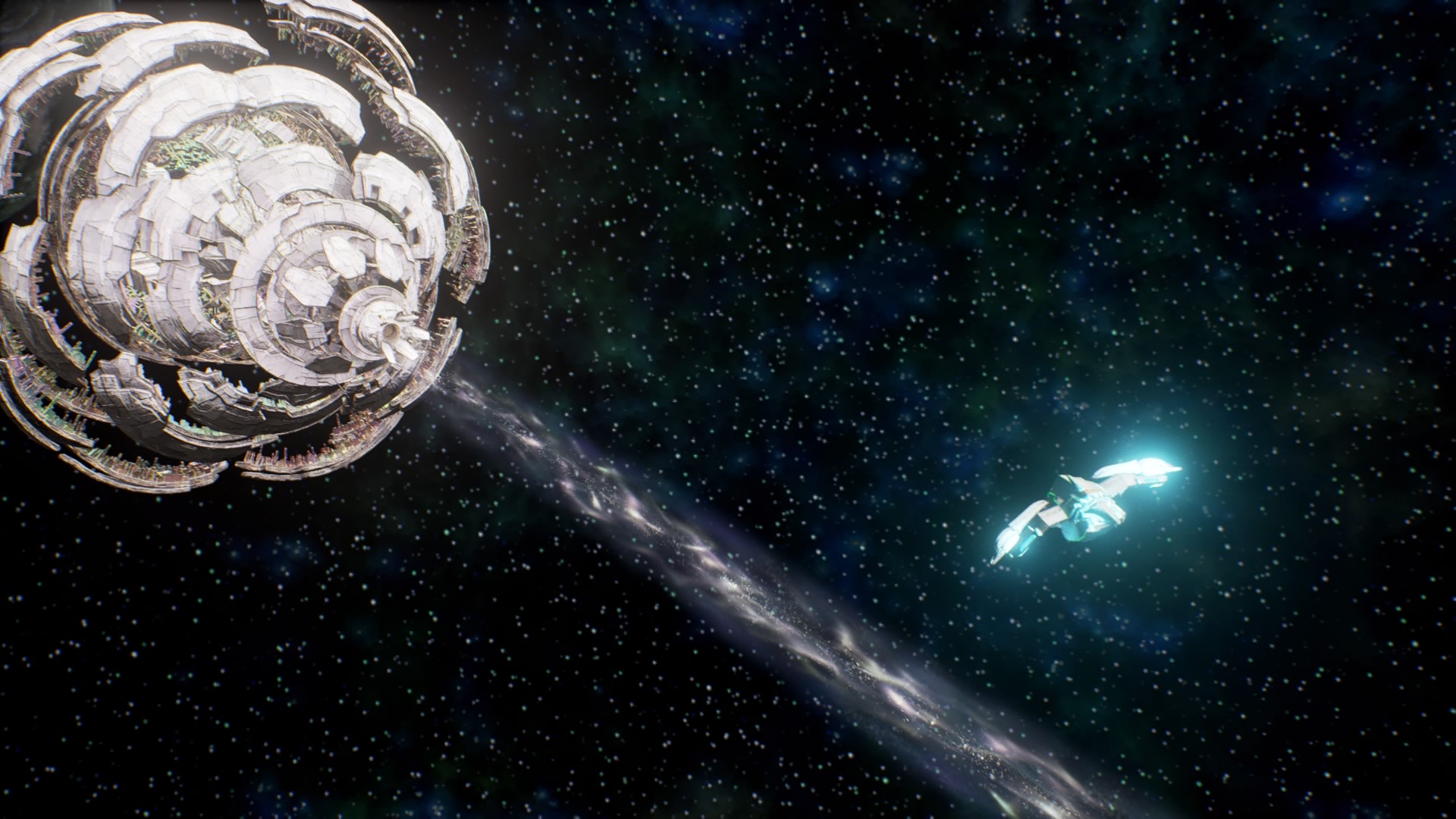 Overall, Arise is a fantastic game. It’s approachable enough I’d even recommend it as a good entry JRPG for those who want to check out the genre without going full JRPG. For what I would like to see next for Tales: even though the recently revealed Star Ocean The Divine Force looks like a step in the right direction, the Star Ocean series has not seen a high since the Second Story which was released in 1998! Seeing our party in Arise ride a starship to reach Rena got me hankering for a Tales game that does justice to the vision Star Ocean set out to reach but has failed to in its more recent entries. This would be a departure from the standard, more terrestrial, Tales formula but could open up exciting new stories to tell!