Manager Reads returns after a year-long plus hiatus with The Phoenix Project: A Novel about IT, DevOps, and Helping Your Business Win by Gene Kim, Kevin Behr and George Spafford.

Who recommended the book? Twitch’s Leadership Book Club selected this book in a recent poll to decide the next book we cover. It beat out Dare to Lead (a great book I reviewed in 2019) and Crucial Conversations. 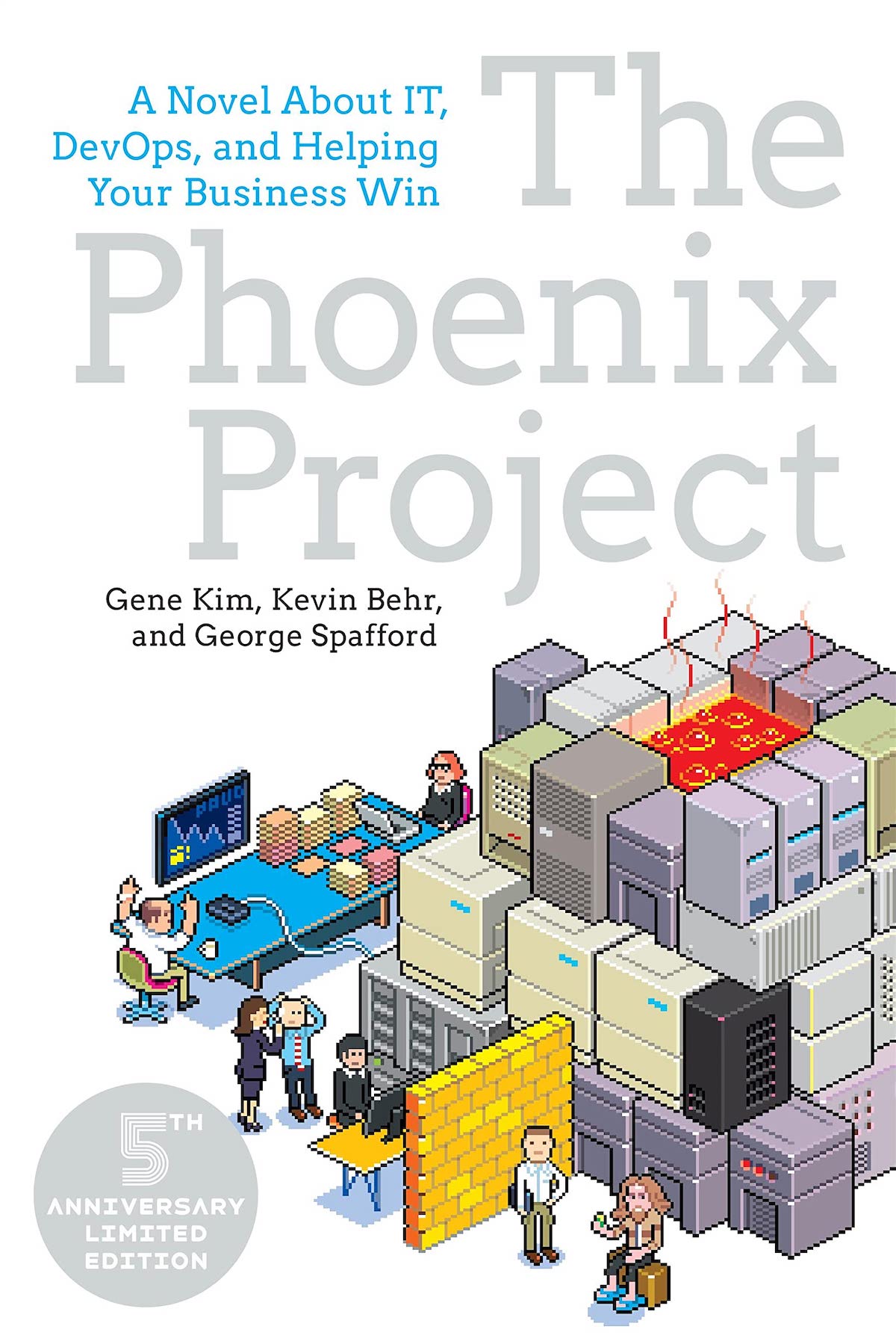 Judge the book by its cover, font, page quality? The Phoenix Project’s cover has a strong retro video game style. Strong because it features some yellow blocks that Super Mario could headbutt into oblivion and a pit of lava at the center of tower of servers that reminded me of Bowser’s Castle. After reading the book you can easily identify most of the pixel art characters on the cover which is a nice touch. I’m into video games so I like this cover but it doesn’t really fit in at all with the story: Parts Unlimited sells car parts and I don’t think anyone in the story would say the stuff they’re doing is a game.

The video game creativity ends once you crack the book open. Everything here is standard and drab; even chapter headers, where some books take liberties to bring some flare, are plain and boring. The pages are thin - you can see text on the opposite side if there is blank area on the page you are looking at - but fortunately lines I highlighted for my notes did not bleed through to the other side.

Since we’re overanalyzing anyways, if you’re slightly intimated by the size of this book note that 18% of the book is the first few chapters of another book, The DevOps Handbook. This upsell is even cheesier because at the end of The Phoenix Project the protagonist, Bill, is told to write this exact book by the irrevent know-it-all mentor, Erikk. The cross-sell game here is overwhelming.

Thoughts on the book and the big take-aways? The Phoenix Project takes us through the journey of turning around an underperforming company Parts Unlimited. It takes a while but we eventually learn the Three Ways that delivers success:

The crux of The Phoenix Project’s problem: it’s a long narrative to just cover these three nuggets of wisdom. While this is an easier read compared to information dense, non-narrative leadership books the pay-off just isn’t there. The narrative generally sounds like something you’d expect in the real world but is marred with unbelievable characters like Erikk (the mentor) who is extremely annoying. He goes out of his way to get everyone’s name wrong which makes tying the bad behaviors he’s discussing back to the person difficult, and will give hints about these nuggets of wisdom and then will actually just run away. Who does that?

Favorite quote from the book? “WIP is the silent killer.”

Elevator pitch for suggesting (or not suggesting) the book? If you enjoyed books like Leadership and Self-Deception or The Five Dysfunctions of a Team, The Phoenix Project will be up your alley. If you’re looking to maximize knowledge bang for your buck, look elsewhere.

Notes in Evernote? Notes for these narrative-heavy books are weird but check out my notes on 🐘.